The United Nations (UN) Subcommittee on the Prevention of Torture (SPT) begins its first visit to Australia today, which will last for 12 days from 16 Oct 2022 – 27 Oct 2022. As part of its visit, Australian women’s advocates are calling on the SPT to investigate the human rights risks facing women when men who identify as women are allowed entry to female detention facilities.

The purpose of the SPT’s visit is to assess, advise and assist Australia in meeting its international commitments to prevent torture and other cruel, inhuman or degrading treatment or punishment under the Optional Protocol to the Convention Against Torture (OPCAT).

OPCAT is an international human rights treaty that assists state parties in the implementation of the UN Convention against Torture and Other Cruel, Inhuman or Degrading Treatment or Punishment (CAT), with a particular focus on preventing the mistreatment of people in detention. It was adopted in 2002 and entered into force in 2006. To date, OPCAT has been ratified by 91 states, including Australia.

The mandate of the SPT is to safeguard detained persons’ rights against torture and other cruel, inhuman or degrading treatment or punishment, through visits and recommendations to states that have ratified OPCAT.

States must allow the SPT unannounced and unhindered visits to all places where persons are deprived of their liberty and are also under an obligation to establish an independent torture prevention monitoring body, known as a National Mechanism for Prevention of Torture (NPM), which conducts regular visits to places of detention throughout the country.

While Australia ratified OPCAT in December 2017, it opted to postpone establishing a NPM until January 2022. The Australian government further requested a one year extension, which was granted by CAT earlier this year.

During its visit, the SPT will assess how authorities have implemented their obligations under OPCAT, with the hope that the visit will help ensure Australia meets its deadline to fully implement OPCAT by January 2023. The SPT will also assess the treatment of people deprived of their liberty, and examine existing protection measures against torture and other cruel, inhuman or degrading treatment or punishment.

In preparation for the SPT’s visit, Australian women’s advocates have made a joint submission raising concerns about the harmful practice of housing trans-identified males (TIMs) in women’s prisons. 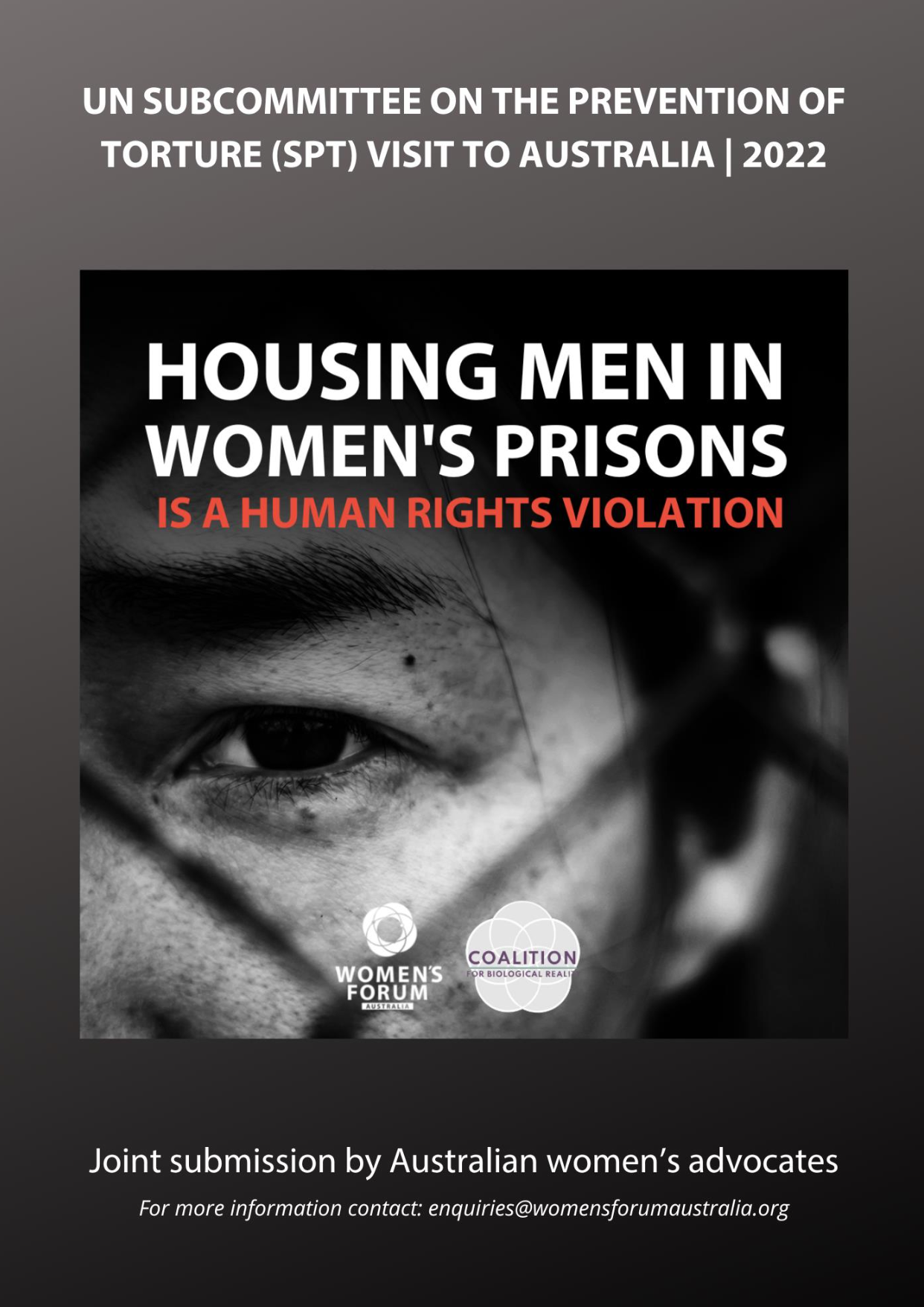 This practice and the ways in which it can put female prisoners and female prison workers at risk of torture, and other cruel, inhuman or degrading treatment or punishment, is the focus of the submission.

“The harms of housing TIMs in female detention facilities most seriously include the rape of female inmates, an example of which was first recorded in Australia as early as 1999 when a TIM was transferred to a women’s prison…Rape is a specific form of torture used most frequently against women. To subject female prisoners to the perpetual threat of rape and sexual assault is cruel, inhuman and degrading treatment, and a form of psychological torture.” (pp. 2-3)

These same women’s advocates have been calling for the removal of a male sex offender from Victoria’s Dame Phyllis Frost women's prison, as part of a campaign started by Women’s Forum Australia and the Coalition for Biological Reality, in response to pleas for help by female inmates in that facility in August 2022. Victorian authorities are yet to take action.

We have specifically requested that the SPT visit Dame Phyllis Frost to speak with the female inmates who understandably “feel threatened, unsafe, distressed and traumatised” at this current situation. We have asked that it calls on the Australian Federal Government and Australian state governments to protect the safety and human rights of female inmates by removing all males from women’s prisons and keeping prisons in Australia single-sex. Everything should be done to protect the rights and safety of all incarcerated persons, but housing males - particularly violent sex offenders - in women's prisons, is not the solution.

We have also sent a copy of our submission to Dr Alice Jill Edwards, an Australian and the first female Special Rapporteur on Torture, requesting her assistance in our efforts to protect the human rights and safety of female prisoners in Australia, specifically at Dame Phyllis Frost. “Among Dr. Edwards’ most renowned work is her breakthrough legal argument, which is now accepted as doctrine globally, that rape and sexual violence are forms of torture and persecution”.

The SPT communicates its recommendations and observations to states by means of a confidential report, however, state parties are encouraged to request that the SPT publish the reports. We will be calling on the Australian Government to request full publication of the report.