Our campaign to remove a violent male sex offender from the Dame Phyllis Frost women’s prison in Victoria is heating up.

After three weeks of calling on Minister for Corrections Sonya Kilkenny and other Victorian leaders to remove the male sex offender from the women’s prison in Victoria (via letters, emails and social media), the Victorian Equal Opportunity and Human Rights Commission (VEOHRC) has confirmed that it will be meeting with Corrections Victoria in October to discuss the issue. 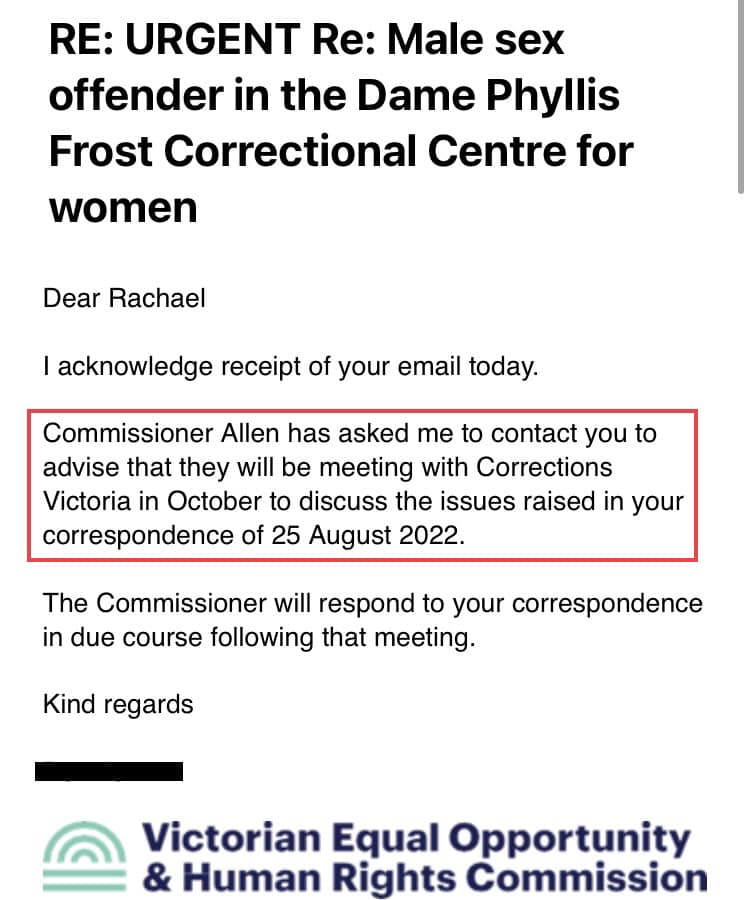 The Victorian Ombudsman's office has also confirmed that it will be investigating this issue using its ‘own motion’ powers. 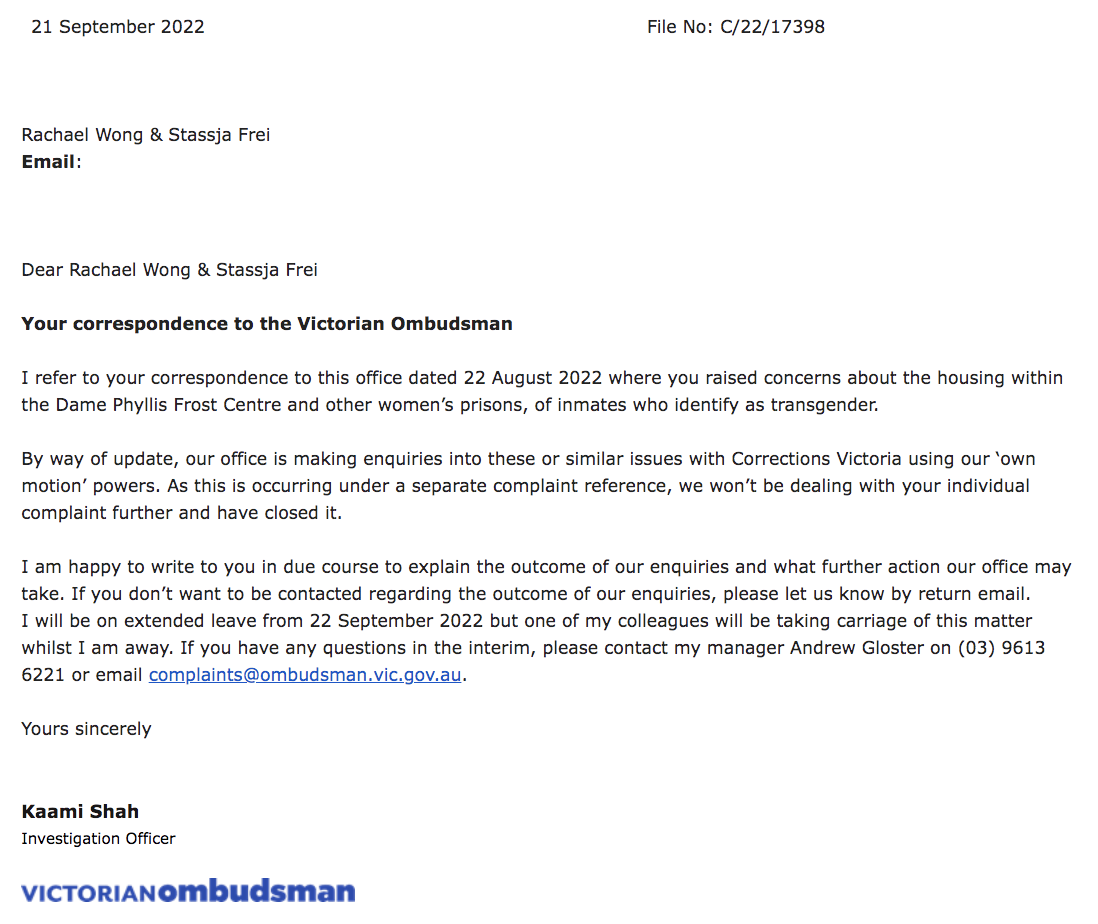 These developments come after women from around the country came together in support of our campaign to remove the man – who now identifies as female – from the women’s prison. The distraught female inmates had themselves asked authorities to remove the prisoner, but their pleas were ignored.

The petition has also been shared by female Liberal Party leaders like Senator Claire Chandler, Senator Jacinta Nampijinpa Price and former Senator Amanda Stoker. Labor politicians have yet to show their support for the female inmates.

Stassja Frei, Coalition for Biological Reality Founder, said the issue has galvanised women across the political spectrum in support of the female inmates.

“We’ve seen outrage from leading female academics, organisations and media commentators who can see the grave threat to women’s safety and human rights, and have come together in support of these women,” said Frei.

“This is not a political or partisan issue. It is about protecting vulnerable women from a violent male sex attacker, many of whom already have backgrounds of sexual assault. We talk about preventing domestic violence and sexual assault in this country, so why the flagrant disregard for women's safety in this instance?”

“The fact that we’ve got nearly 7,000 signatures on our petition shows this is not in line with the expectations of the community.”

Protest outside Parliament House in Melbourne

Independent of our petition, women also recently held a protest outside Parliament House in Melbourne, calling for the removal of the male sex offender from the women's prison, as well as the removal of all men from women’s prisons in Victoria. 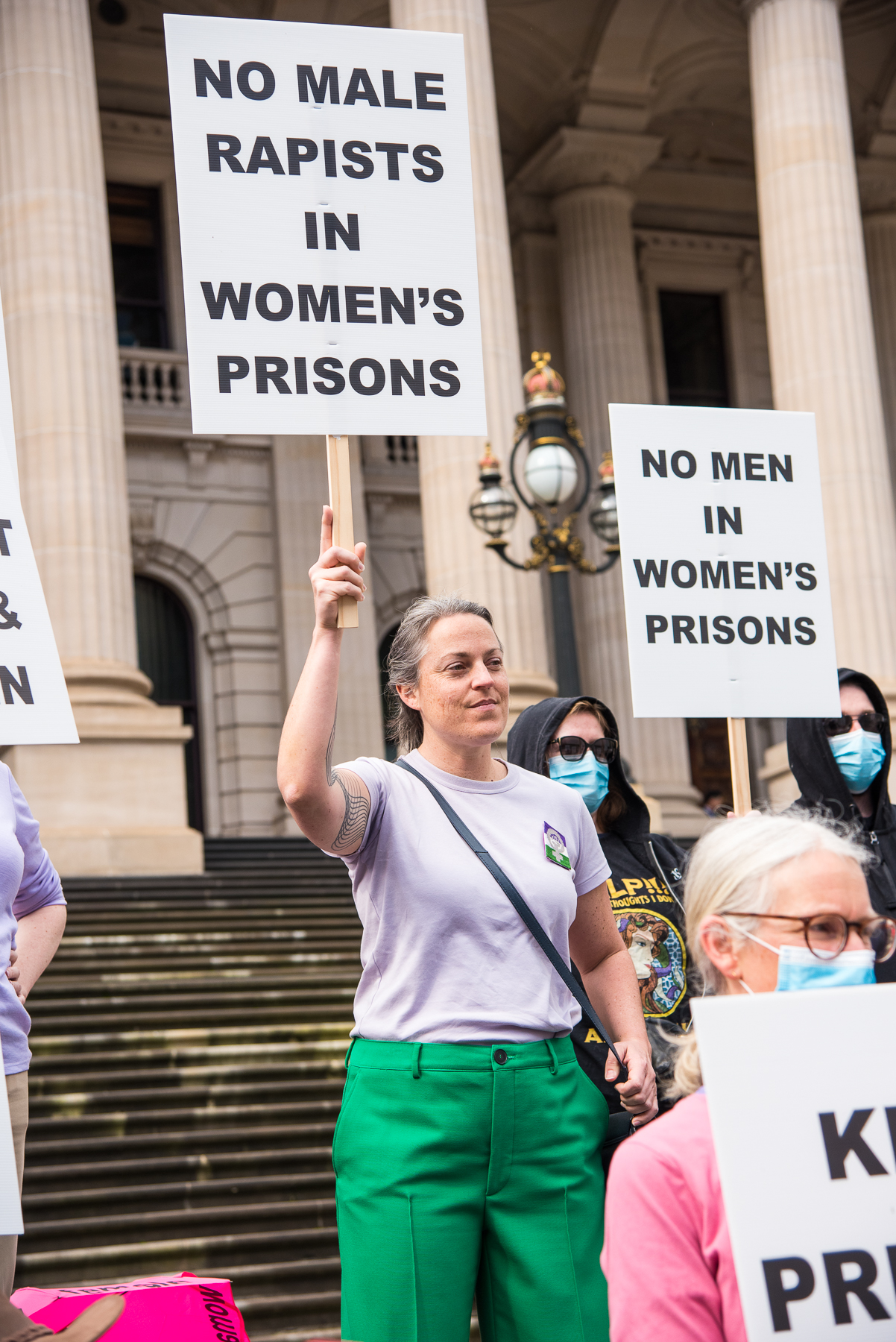 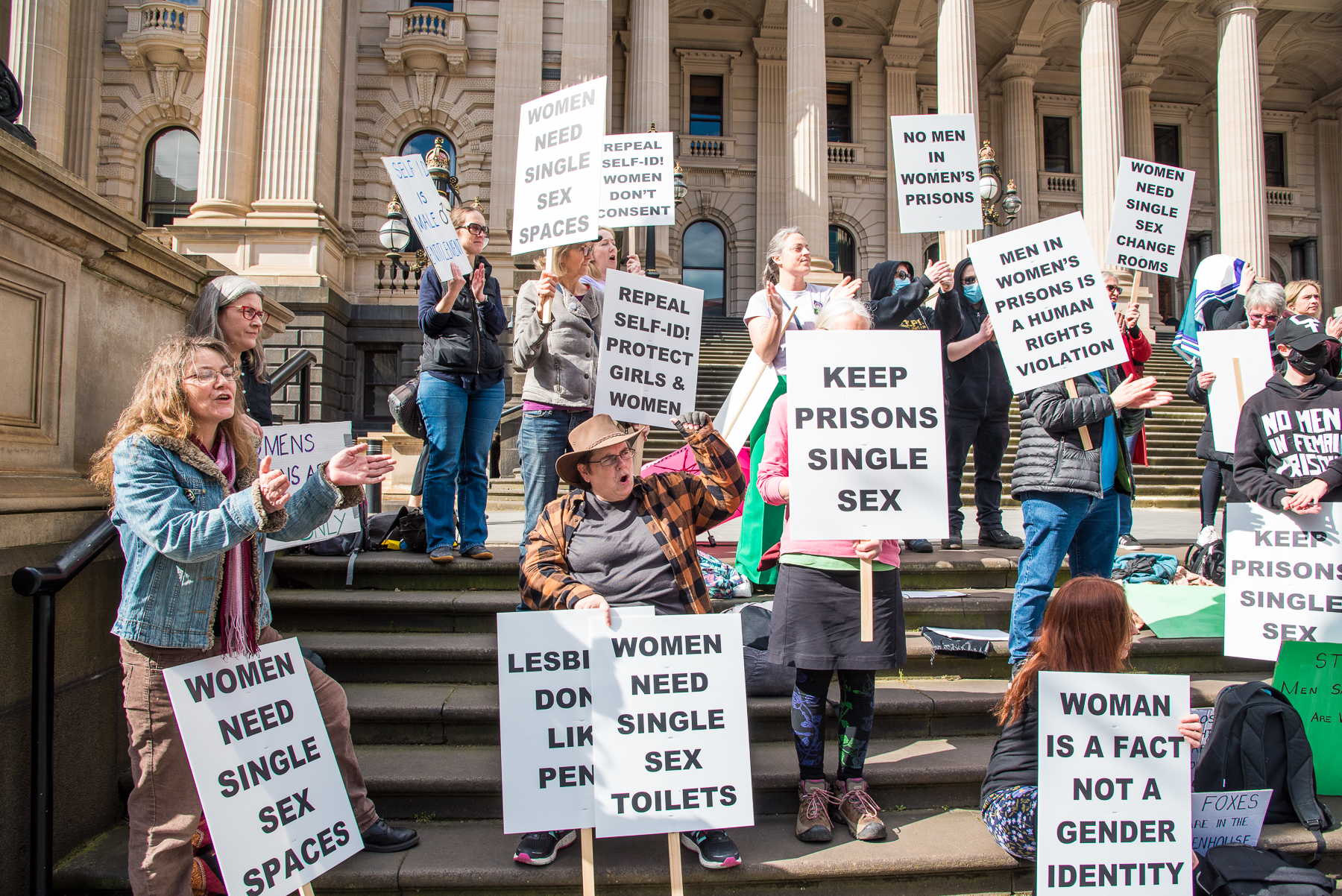 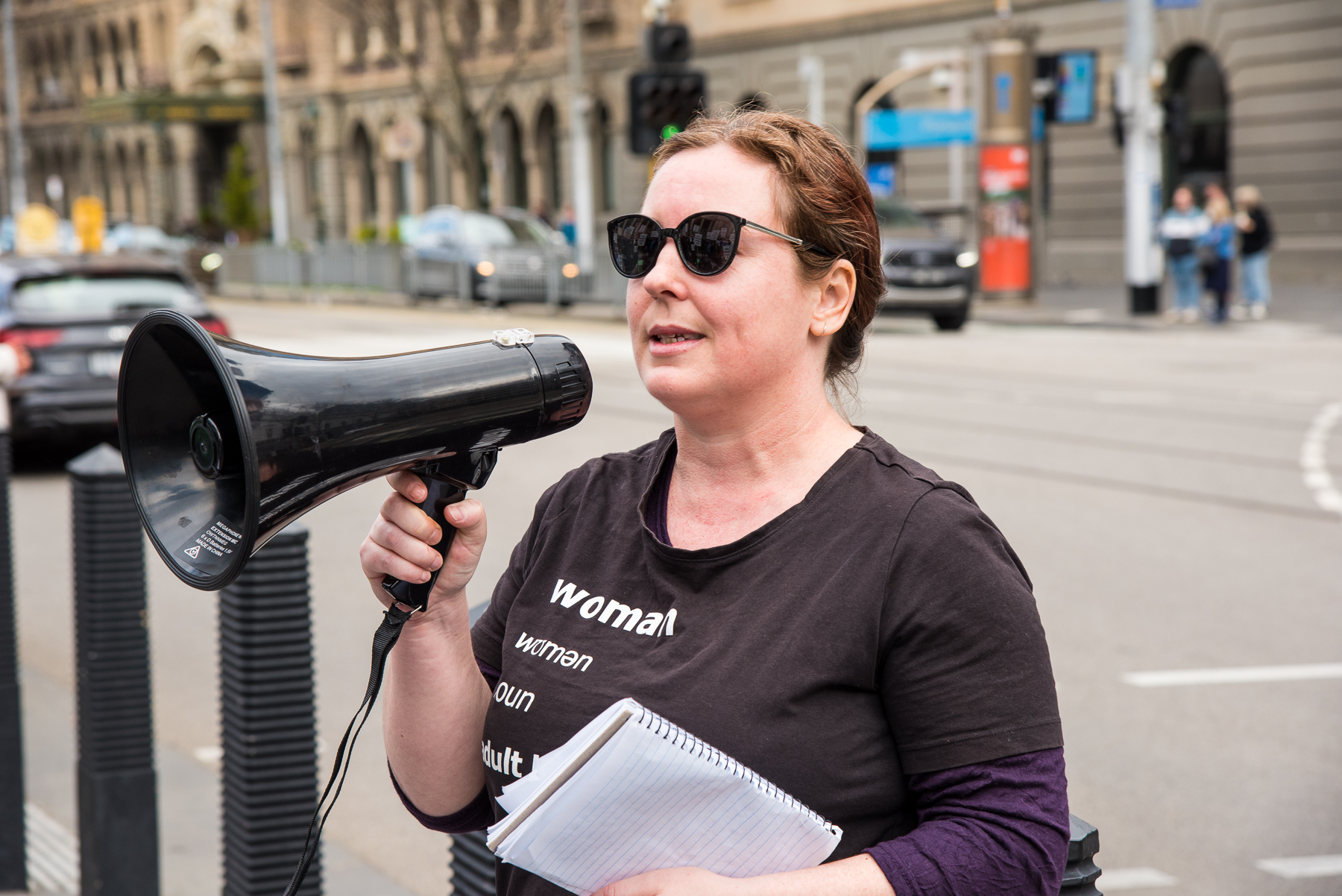 IWD Brisbane Meanjin has also been holding multiple protests to raise awareness about the importance of women's single-sex spaces and the harms of self-identification laws, including drawing attention to the injustice of housing men in women's prisons. 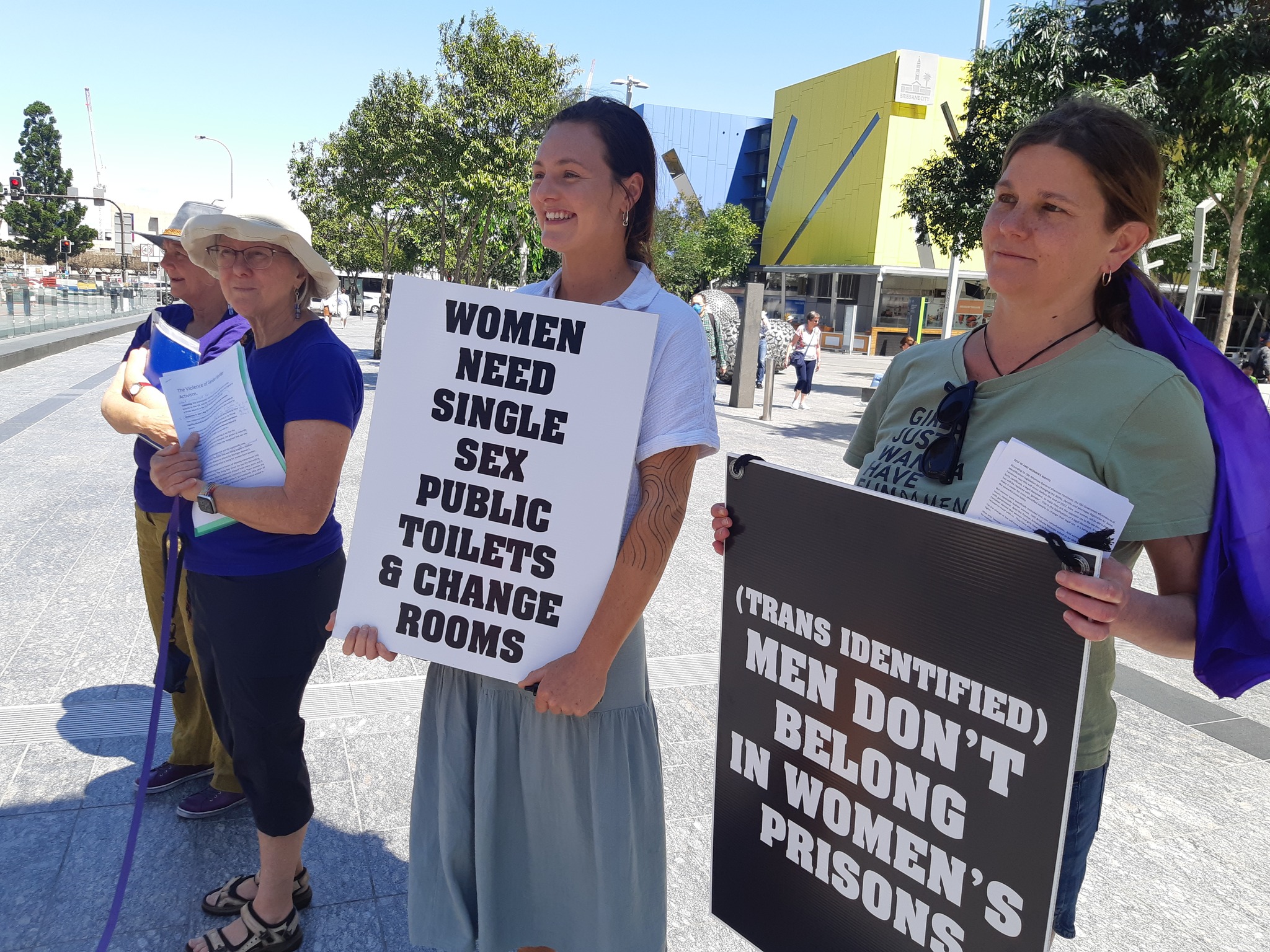 This week both The Australian and Sky News reported on our efforts to have the male sex offender removed, amplifying awareness of this issue in the public sphere and increasing pressure on Victorian leaders to act.

Women’s Forum Australia CEO Rachael Wong told Sky News that housing a violent sex offender “with a working penis” in a women’s prison, with the person having already committed sexual offences against women, is “clearly not ideal at all and is a complete failure of the system”. 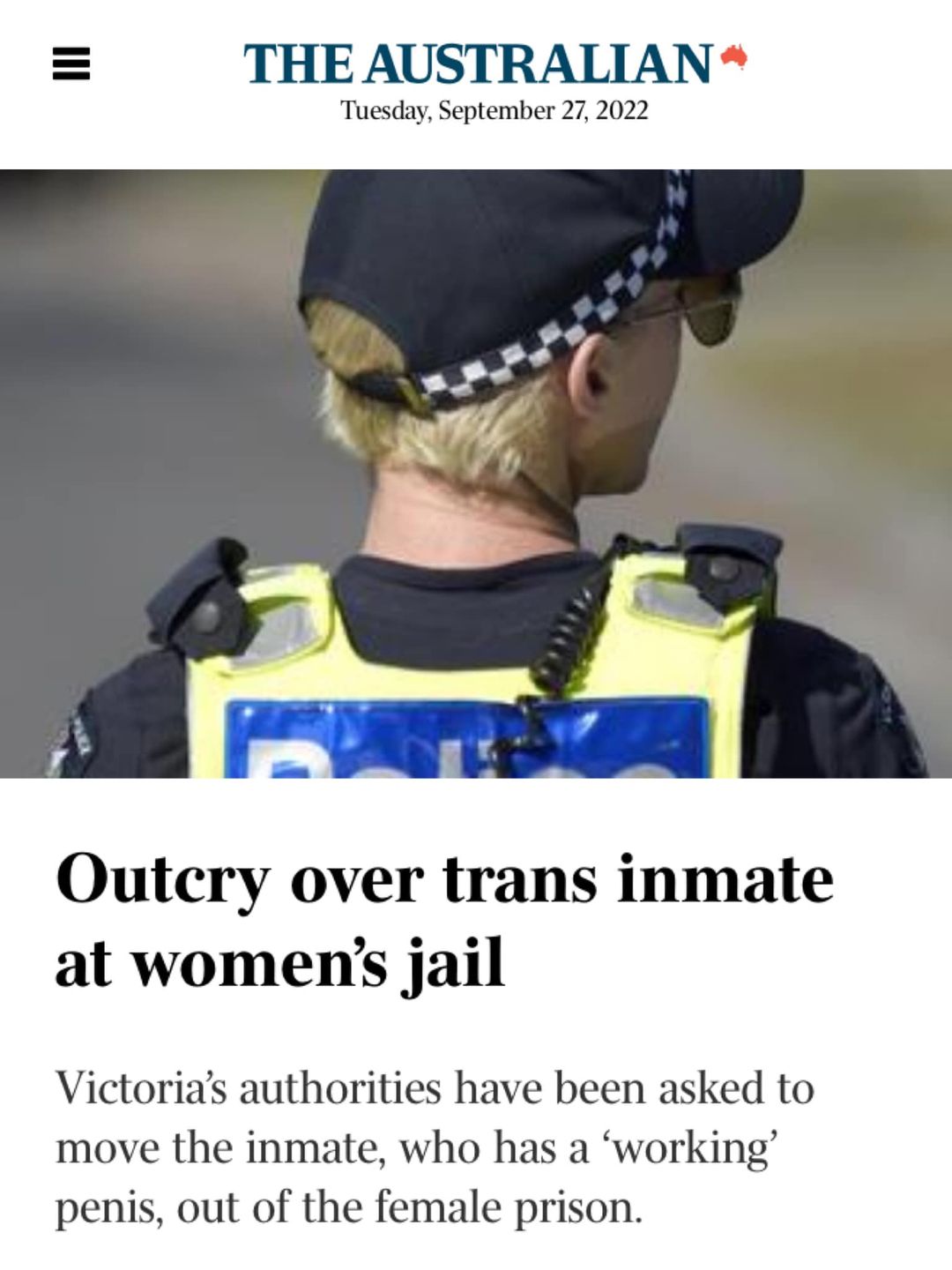 “Everyone has a right to feel safe, including when they are in a correctional facility. Many of the women in our jails are vulnerable, with many having experienced sexual violence from males. Housing them with a biological male who is a convicted sex offender is an abject failure of the system,” Wong told The Australian.

According to The Australian, “A spokesperson for the VEOHRC said it was aware of the case and concerns that have been raised about it.”

"The Commission is aware of concerns that have been raised regarding the placement of a transgender woman at the Dame Phyllis Frost Correctional Centre,” they said.

“The Commission is unable to comment directly on the case, but can confirm that we will be meeting with the Department of Corrections in coming weeks to discuss the relevant human rights considerations.”

They said Corrections Victoria’s policy for the management of prisoners who are trans, gender diverse or intersex “strikes the right balance” with the rights of other inmates.

“This nuanced approach to prisoner management aligns with the recommendations of the UN Special Rapporteur on Torture who has found that transgender persons are at a high risk of violence within prisons and encouraged States to take an individual’s gender identity into account when making decisions on placement,” they said.

And a spokeswoman for the Department of Justice and Community Safety told The Australian that “inmate placements are made based on a balance between individual rights and the safety and security needs of the prison.”

“The placement of prisoners is subject to regular review in order to achieve a balance between health, safety, social cohesion and rehabilitation,” she said.

“Corrections Victoria does not comment on individual prisoners or their placements."

We are pleased the VEOHRC has agreed to meet Corrections Victoria in October to discuss our concerns, and we hope they will do the right thing and choose to protect the safety and human rights of imprisoned women.

However, comments like "Corrections Victoria’s policy for the management of prisoners who are trans, gender diverse or intersex 'strikes the right balance' with the rights of other inmates" gives us cause for concern. A policy that results in the housing of a violent male sex offender with vulnerable women clearly does not ‘strike the right balance’. Either that, or the policy has been misapplied.

Bit confused as to how locking a convicted male sex offender in with women (some whom have experienced sexual assault & abuse) who cannot escape or avoid him is “striking a right balance”@WomensForumAust @VEOHRC #theaustralian #sexnotgenderhttps://t.co/crKT8ZFM4o

What’s more, Corrections Victoria has ignored its own Commissioner’s Requirements around prisoner safety, as well as two sets of United Nations Rules regarding the human rights of prisoners that it references on its own website. The UN rules require that males and females be housed separately and that the distinctive needs of women be taken into account.

Unfortunately, many of the Victorian MPs contacted appear to be disinterested in protecting the safety and human rights of women. Premier Dan Andrews and Minister for Women The Hon Natalie Hutchins have failed to respond to our concerns at all. And Attorney-General Jaclyn Symes and Minister for Equality Harriet Shing have declined to intervene, passing the issue to Minister for Corrections Sonya Kilkenny. 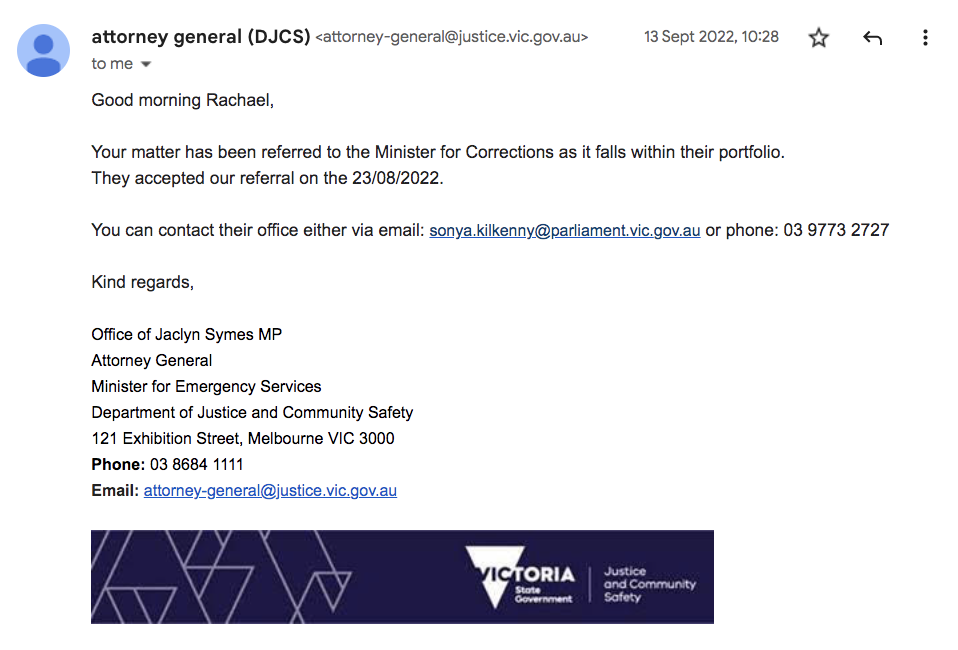 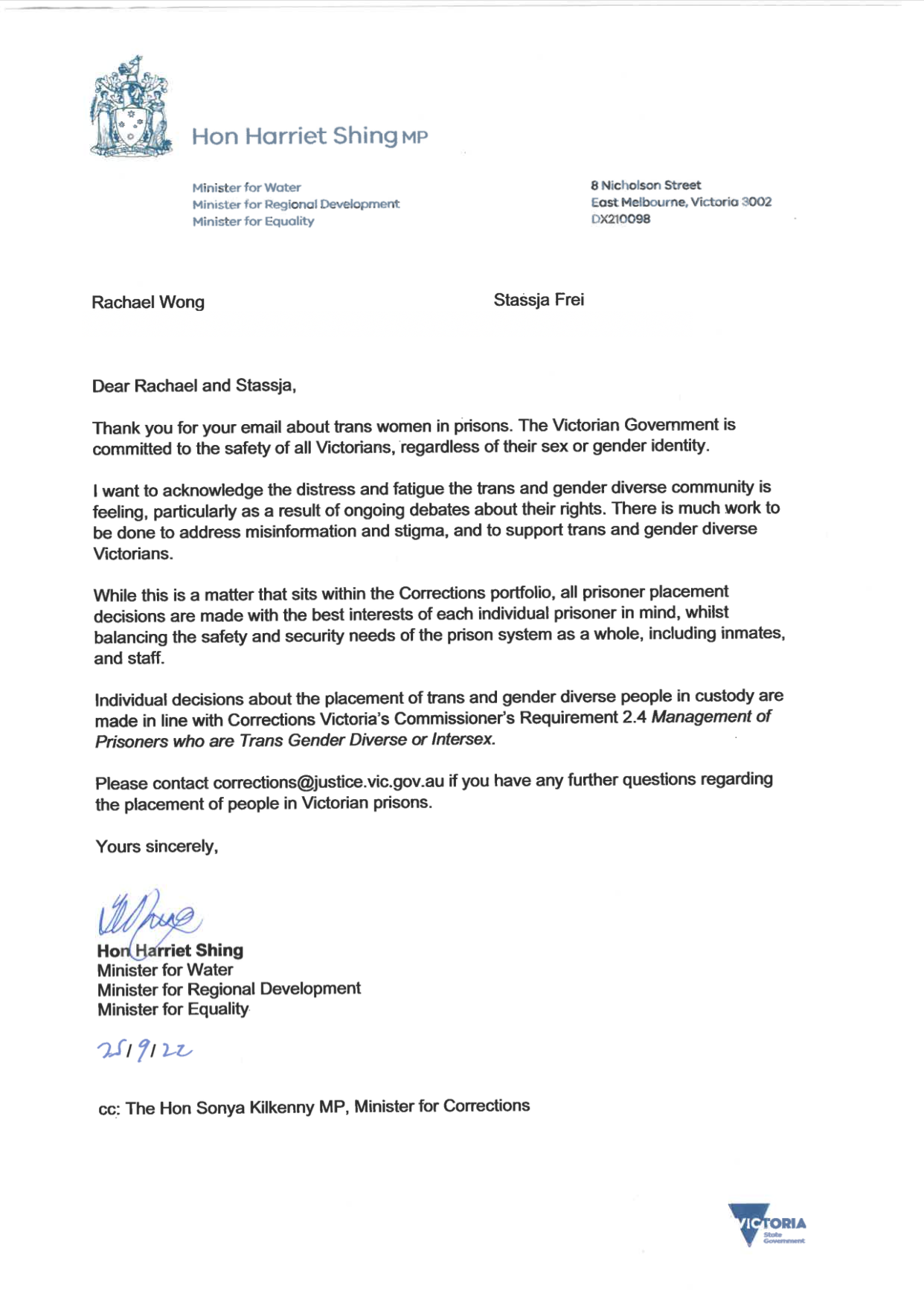 Equality Minister Harriet Shing’s response - received after The Australian reported on our campaign and over a month after we contacted her - was particularly disappointing.

Her letter mentions the “distress and fatigue the trans and gender diverse community is feeling as a result of ongoing debates about their rights” and the need to support them. However, it makes no reference whatsoever to the safety and rights of women - which are currently being undermined - or to the distress and fear that female inmates are experiencing as a result of a male sex offender being housed in their prison. Elevating the “safety and security” of a violent male sex offender above that of vulnerable women because he identifies as trans, is the antithesis of equality.

As Sall Grover has noted in her powerful response, the Equality Minister's letter shows an “apparent disregard for the women currently incarcerated with a male sex offender.”

My email to Harriet Shing @ShingvWorld, Labor MP for the Eastern Victoria Region, in response to her apparent disregard for the women currently incarcerated in a Victorian women's prison with a male sex offender. pic.twitter.com/U8yJZnd3xN 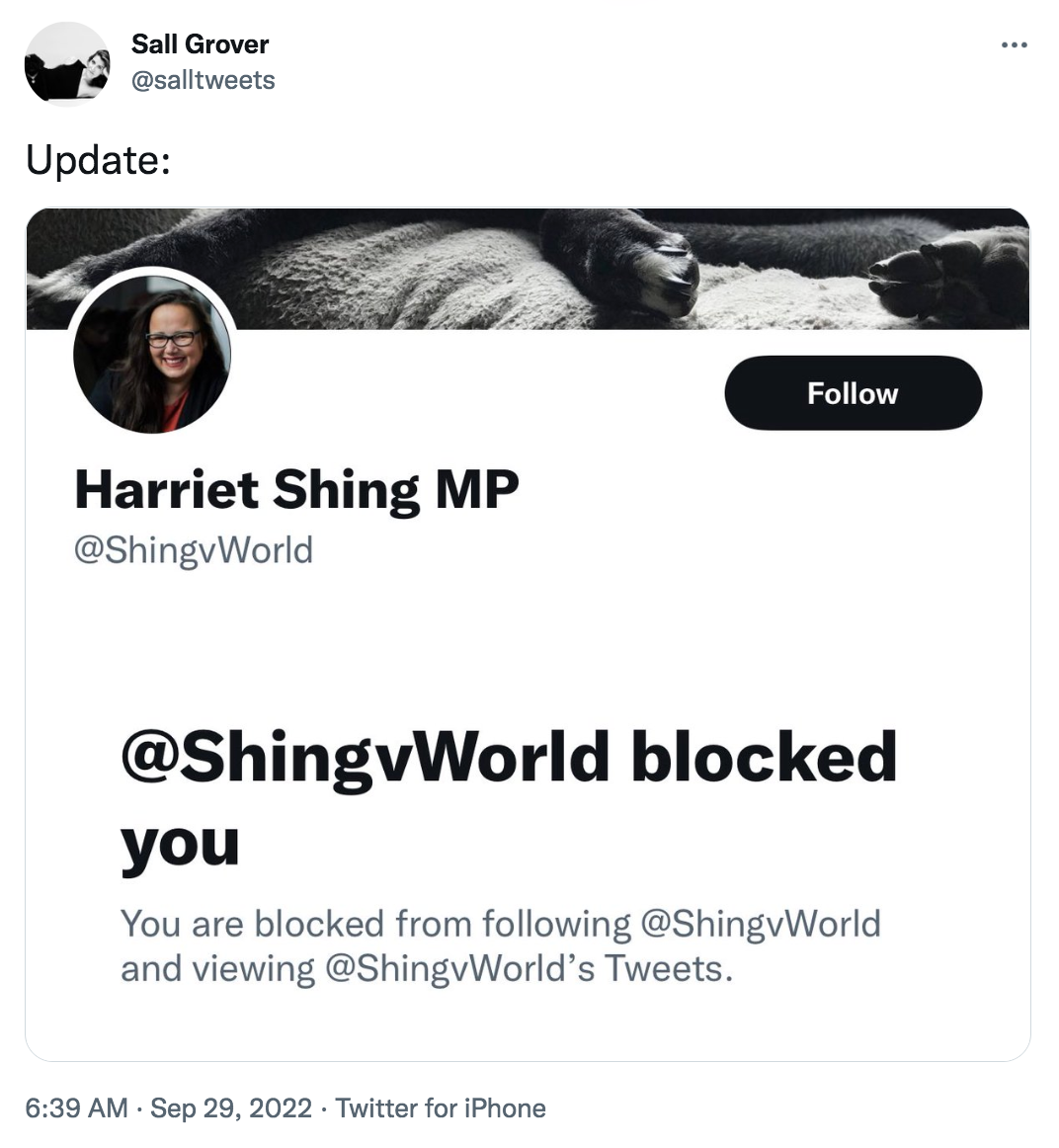 It was recently revealed by The Age that a female inmate was allegedly sexually assaulted by a trans identifying male prisoner in Victoria’s Tarrengower women’s prison. This, along with multiple overseas examples, demonstrates just how real and urgent this issue is.

Do we really have to wait for women to be raped or assaulted in the Dame Phyllis Frost prison before action is taken?

Please contact Corrections Minister Sonya Kilkenny and VEOHRC Commissioner Ro Allen with your concerns about this issue in advance of their meeting in October.

For more information and to sign the petition go to: womensforumaustralia.org/NoMenInWomensPrisons