Demand the removal of men from women’s prisons in Victoria

Demand the removal of men from women’s prisons in Victoria

Housing men in women’s prisons is a human rights violation.

Since at least 2019, Corrections Victoria has been allowing convicted male offenders that identify as transgender to be housed in women’s prisons. And according to a recent response to a Freedom of Information request, what is even more concerning is that they do not appear to be keeping sex-based data or tracking how many males are being kept with female inmates.

In August 2022, it was revealed by the Herald Sun that a man convicted of serious sexual offences against women and children, who now identifies as transgender, is being housed in the Dame Phyllis Frost Correctional Centre for women.[1]

Female prisoners are petitioning multiple Victorian government departments for the immediate removal of the man in question. The petition says that many of the prisoners carry significant trauma associated with having been victims of sexual assault or supporting victims, and that on hearing the news, "the mental wellbeing of many of the women was severely compromised." They understandably “feel threatened, unsafe, distressed and traumatised with this current situation.”

Corrections Victoria has made a significant error in judgment, ignoring its own Commissioner’s Requirements which state that, "In the placement of trans, gender diverse and intersex prisoners, the safety and welfare of the prisoner and of other prisoners are of paramount consideration", and require it to consider that trans identifying male prisoners “might pose safety risks to others, particularly if their criminal record indicates a history of sexual and / or physical violence.”[3]

Of particular concern regarding the Commissioner’s Requirements is Section 6.1.1 which states: “As a guiding principle, a person should be imprisoned in the prison of their gender rather than their sex assigned or assumed at birth.”[4] This is wrong and puts women at risk of violence, sexual assault,[5] and unwanted pregnancy,[6] as has been demonstrated in overseas jurisdictions.

Corrections Victoria has also ignored two sets of United Nations Rules regarding the human rights of prisoners that it references on its own website.

The United Nations Standard Minimum Rules for the Treatment of Prisoners (the Nelson Mandela Rules) require that "different categories of prisoners shall be kept in separate institutions or parts of institutions, taking account of their sex, age, criminal record, the legal reason for their detention and the necessities of their treatment” and that “men and women shall so far as possible be detained in separate institutions”.[7]

The United Nations Rules for the Treatment of Women Prisoners (the Bangkok Rules) further highlight the “distinctive needs of women prisoners”, the commitment “to take positive measures to address structural causes of violence against women…including with regard to…women in institutions or in detention”, women’s “right to be free of victimization while imprisoned”, and the fact that “physical and psychological safety is critical to ensuring human rights and improving outcomes for women offenders”.[8]

Males who identify as transgender are not the only men at risk of violence in men’s prisons. We believe solutions for male-on-male violence rests with men’s prisons and that separate units for all vulnerable males is the best option. 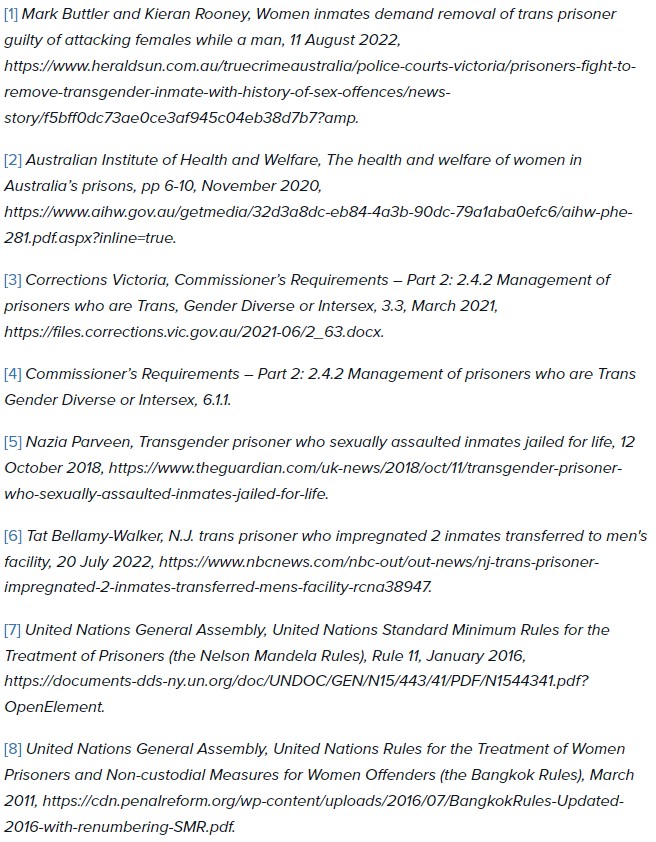