The offences, which included gross indecency, directing a person to sexually manipulate him and producing child exploitation material, allegedly occurred at different locations in rural and regional South Australia during 2019.

44-year-old Burton – a trans identified male – has over 36,000 followers on TikTok’s popular video platform and has posted over 500 videos. He describes himself as a “proud trans woman” who is “living my best life”.

When posting the story on Twitter and throughout the article, Fewster refers to Burton as a ‘woman’, using ‘she/her’ pronouns throughout. 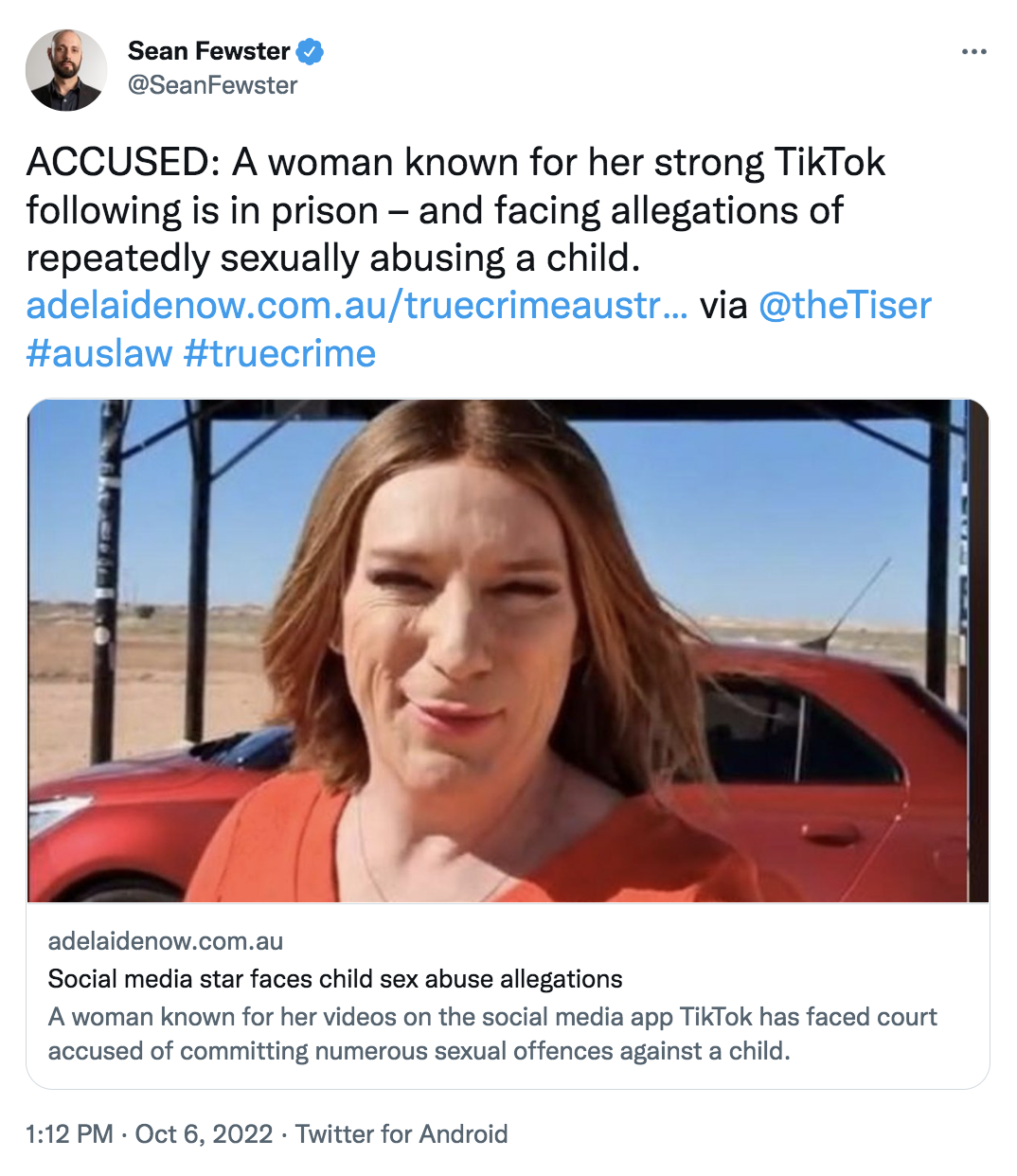 Those on Twitter were quick to call out the lie:

“What part of this man is a woman? Is it your decision or an editorial decision to lie to Australians about this?” asked author and historian Janet Fraser.

Giggle founder Sall Grover wrote: “I know you have a job to do & you don’t dictate the style guide that journalists must adhere to. But a journalist in Australia has to pose this question to their bosses: Who the hell is for male [alleged] child abusers being called women? Who??? Beyond the male [alleged] child abuser, who does this benefit? Children? No. Women? No. Trans people? No. Men? No. So, please, tell me, who is this for?”

“Sean, this is a man. If you have any integrity as a journalist, report the truth,” said researcher Kit Kowalski.

“Just stop it. You know this is a man,” said American feminist Kara Dansky.

“This is a man!” tweeted Mellie Adamson. “You’re concerned about being polite towards [alleged] sex offenders, but you’re not concerned that referring to this man as a woman isn’t damned disrespectful and offensive to women?”

“A major component of any form of data is trust that the information is true & reflects reality. Inaccurate data impacts negatively on decision making. Particularly important for government to have quality crime data! #DoBetter”, wrote Ajc.

“Not a woman, #NotOurCrimes,” tweeted our CEO Rachael Wong.

This is not the first time the media has referred to a male sex abuser as a ‘woman’. Last year, news.com.au ran a piece titled ‘Female sex attacker’s horror demand’. The attacker, trans identified male Lisa Jones, was convicted of sexually assaulting a woman on a Melbourne Street and had previously spent six years in a male prison in Germany for sexually abusing a six-year-old-girl, before transitioning.

It is believed that Jones is the same male sex offender that is currently being housed in Victoria’s Dame Phyllis Frost women’s prison and who we, along with other women’s advocates, have been campaigning to get removed.

Burton’s case has been adjourned until December to allow electronic analysis of his laptop. Burton has been in custody since June and we are trying to ascertain whether he is currently being held with women, and whether he will be housed in a women’s prison if convicted. The only thing more abysmal than charged/convicted sexual abusers being called ‘women’, is that they are being locked up with them as well.

The policy around transgender prisoners in South Australia is not clear cut and placements are made on a case-by-case basis. As we have said time and again, everything should be done to protect the safety of all incarcerated persons, but housing males - particularly violent sex offenders - in women's prisons, poses grave risks to female inmates. We will be doing all that we can to ensure that if convicted, Burton is not locked up with vulnerable women.