University of Pennsylvania swimmer Lia Thomas (a biological male) has become the first transgender athlete to win a US national championship.

As Tasmanian Senator Claire Chandler wrote on her Facebook page, “If you don’t see the problem, you are the problem”. 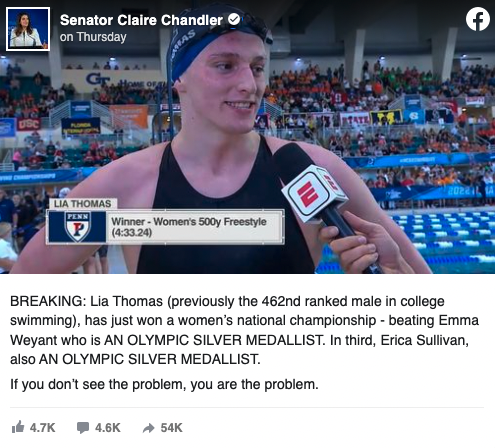 Some athletes like Sullivan, who came in third to Thomas, have shown support for the trans swimmer, arguing that women’s sport has other far more important issues to address:

“As a woman in sports, I can tell you that I know what the real threats to women’s sports are: sexual abuse and harassment, unequal pay and resources and a lack of women in leadership. Transgender girls and women are nowhere on this list.”

Of course, the fact that there are other threats to women’s sport doesn’t negate the gravity of this one.

As a result of Thomas’ performance in the women’s swimming event, there has also been widespread criticism regarding the unfair participation of trans athletes in women’s sports, including from other swimmers brave enough to speak out about the NCAA competition.

A Virginia Tech swimmer competing in the championship went on the record to talk about how one of her teammates was brought to tears after her place in the finals was taken by Thomas. 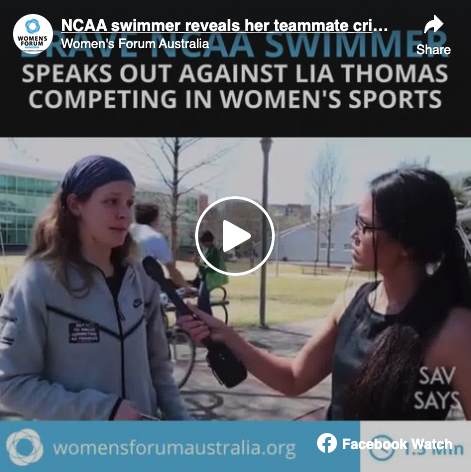 Now the swimmer who lost her place in the finals to Thomas, Réka György, has spoken out herself in a strong open letter to the US college sports’ governing body. She says that she stands with Lia Thomas but blames the institution for how it handled the situation, particularly calling out the unfair rules that allow biological males to compete against women. 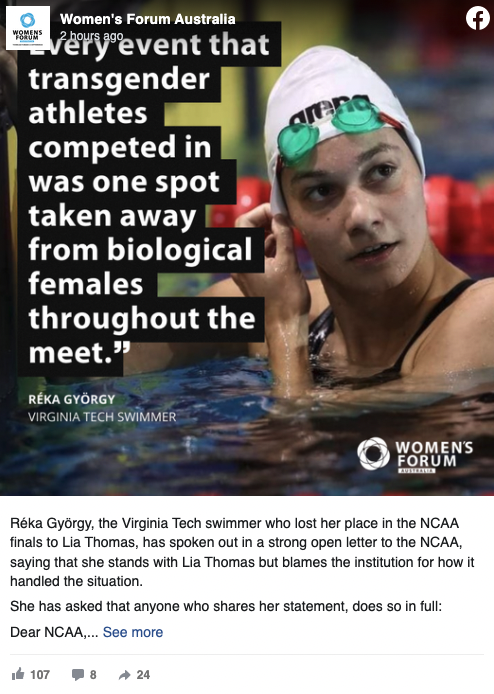 She has asked that anyone who shares her statement, does so in full:

My name is Reka Gyorgy from Hungary. I am a 2016 Rio Olympian, represented Virginia Tech for the past 5 years, a 2 time ACC Champion, 2 time All-American and 3 time Honorable Mention All-American.

With all due respect, I would like to address something that is a problem in our sport right now and hurting athletes, especially female swimmers. Everyone has heard and known about transgender, Lia Thomas, and her case including all the issues and concerns that her situation brought into our sport. I’d like to point out that I respect and fully stand with Lia Thomas; I am convinced that she is no different than me or any other D1 swimmer who has woken up at 5am her entire life for morning practice. She has sacrificed family vacations and holidays for a competition. She has pushed herself to the limit to be the best athlete she could be. She is doing what she is passionate about and deserves that right. On the other hand, I would like to critique the NCAA rules that allow her to compete against us, who are biologically women.

I’m writing this letter right now in hopes that the NCAA will open their eyes and change these rules in the future. It doesn’t promote our sport in a good way and I think it is disrespectful against the biologically female swimmers who are competing in the NCAA.

I swam the 500 free at NCAA’s on March 17th, 2022 where I got 17th which means I didn’t make it back to the finals and was first alternate. I’m a 5th year senior, I have been top 16 and top 8 before and I know how much of a privilege it is to make finals at a meet this big. This is my last college meet ever and I feel frustrated. It feels like that final spot was taken away from me because of the NCAA’s decision to let someone who is not a biological female compete. I know you could say I had the opportunity to swim faster and make the top 16, but this situation makes it a bit different and I can’t help but be angry or sad. It hurts me, my team and other women in the pool. One spot was taken away from the girl who got 9th in the 500 free and didn’t make it back to the A final, preventing her from being an All-American. Every event that transgender athletes competed in was one spot taken away from biological females throughout the meet.

The NCAA knew what was coming this past week. They knew opinions and minds will be divided and chose to do nothing. This week has been more about reporters, media and division in our sport than things like two women going under 21 seconds in the 50 freestyle, 3 women going under 50 seconds in the 100 butterfly and the first woman IN HISTORY to go under 48 seconds in the 100 backstroke. Thursday was not a specific athlete’s fault. It is the result of the NCAA and their lack of interest in protecting their athletes. I ask that the NCAA takes time to think about all the other biological women in swimming, try to think how they would feel if they would be in our shoes. Make the right changes for our sport and for a better future in swimming.

Thank you for reading,

We stand with Reka in asking the NCAA and other sports governing bodies to change their rules to restore dignity and fairness to women’s sport.