In December 2021, Karyn Lisignoli, the newly-appointed Chief Executive Officer for the Girl Guides of WA, reached out on Twitter to Katherine Deves, the head of Save Women’s Sport Australia, for an answer to a legal question that touches the lives of many Australian women: is it still legal to define women as biological females? 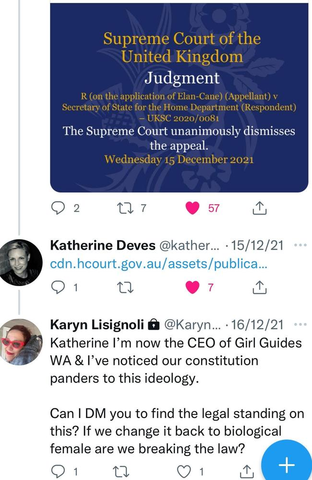 We still do not know how Deves might have answered because by the following week, Lisignoli’s details had been removed from the Girl Guides of WA website and her job was advertised as “under recruitment”. OUTinPerth, which had first drawn attention to the Lisignoli-Deves conversation, was quick to claim credit for this latest scalp in the culture wars.

They are probably not wrong about that. It seems the pressure of answering questions raised by OUTinPerth’s journalists, Graeme Watson and Leigh Andrew Hill, was just too much for the Girl Guide leadership. As OUTinPerth reports:

In other words, Girl Guides WA lost no time in throwing Lisignoli under the bus and running from the wreckage. According to a recent article in the Australian:

The next day, Ms Lisignoli was given her marching orders in a letter from Girl Guides WA chairwoman Yvonne Power, who terminated her employment because the tweet had “exposed the organisation to serious reputational risk’’.

This week, speaking for the first time since her dismissal, Lisignoli said the question was prompted by concern for the safety implications of girls sharing tents with men or boys who identify as females:

“If we include trans girls who are biological males, they can go to mixed-sex school camps.

“There is a reason why there are certain situations in which we say men can’t be present. Do parents know when they send their nervous and shy 12-year-old girl to Girl Guides that she might be camping in a tent with a biological boy of the age of 15? They might identify as a girl but they are a biological boy.’’

Her comments need to be understood against the backdrop of news from Britain, only the month before, that the transgender lead guiding commissioner for the Rainbow, Brownie, Guide and Ranger Groups of Southwell, Nottinghamshire had been posting bondage photos of himself on a public Instagram account:

The picture, taken in a corridor and posted to the 58-year-old's Instagram page, has the caption: "Now behave yourselves or Mistress will have to punish you" …

Another picture shows the Girlguide leader wielding what appears to be a fake assault rifle with a holstered handgun hanging from her waist while wearing an all-black outfit.

In a third photo shared on Twitter, Ms Sulley posed in a fairly low cut top with the caption: "Boobs, or did you want to see more?". She was seen in a further picture clutching a sword.

Lisignoli’s concerns for the safety of women and girls if biological sex is ignored are clearly not the product of a fevered imagination and people living in the real world and concerned for child protection need to be aware of it.

Surely if an organisation had cause to complain of their appointed leaders exposing them to “serious reputational risk”, it is Girl Guides UK. Yet, especially by comparison with Girl Guides WA’s “dump and run” routine, the response of the UK Girlguiding authorities was laughably restrained:

“Girlguiding bosses have now launched an investigation into Ms Sulley's posts. Angela Salt, the CEO of Girlguiding, last night shared a statement saying the charity is "aware of concerns raised".

To date, no public statements have been issued to suggest that Ms Sulley has been asked to step down from the role of leading guiding commissioner. The only change that has been confirmed is that Ms Sulley’s Instagram account has now been switched to “private”.

Ironically, Girl Guides WA’s remarkably pathetic defence of Lisignoli only proves her point: “our organisation is pandering to ideology”. This episode also makes it more pressing for Australian women to know the answer to Lisignoli’s question: is it legal to define women as biological females in Australia? Does the law allow women to be fired if they dare to ask that question? Upon the answer to these questions hangs the future of single-sex organisations like Girl Guides and single-sex schools.

Since the biological definition of “woman” was removed from the Sex Discrimination Act in 2013, and gender identity was added, it has apparently become difficult for many organisations to answer with confidence even ostensibly simple questions like “What is a woman?”. When Senator Claire Chandler put this question to the Office for Women last year, the waffle and prevarication that followed was farcical. After asking “for further context” and shuffling through papers, they eventually landed on a form of government-endorsed verbiage that relates to gender self-identification, not biology.

If there is a moral lesson to be drawn from Lisignoli’s unfolding story it is this: if the Sex Discrimination Act no longer functions as intended to protect the rights of Australian women and girls to employment, safety, privacy and dignity; if Australian law offers insufficient protections for freedom of assembly and association and freedom of speech, so that women may not even discuss these subjects publicly without being fired for it, then – like the Girl Guide’s constitution – the law needs to be changed back so that it recognises the biological definition of the women and girls it was designed to protect.

By Stephanie Bastiaan In October 2022, the Federal Government and state and territory governments released the National Plan to End...

Why is Queensland’s Minister for Women intent on selling out women and girls?

By Rachael Wong Under Attorney-General and Minister for Justice, Women, and the Prevention of Domestic and Family Violence, Shannon Fentiman’s...

This week saw the global launch of the International Consortium on Female Sport “as the preeminent international lobby group to...

Want to tackle sexualisation on TikTok? Address the issue of pornography

By Rachael Wong The incredibly disturbing and explicit content children are being shown and encouraged to create on TikTok revealed...