The BBC altered a rape victim’s quotes in a story it published to avoid ‘misgendering’ her transgender attacker and conform to the BBC’s style guide which states that a person’s preferred pronouns should be used.

The article in question, published in October 2021, was about lesbian women who felt pressured to have sexual encounters with men who identify as transgender women, and who were subject to accusations of transphobia, verbal abuse and threats of violence if they refused.

The victim, a young lesbian woman, claimed she had been raped by a transgender woman (a biological male), but in every instance where she used the pronouns “he” or “him” to refer to her alleged attacker, the BBC changed the pronouns to read “they” or them” instead. The quote was apparently hotly debated by BBC staff prior to publication.

The woman reportedly told the BBC:

“I was too young to argue and had been brainwashed by queer theory so he was a ‘woman’ even if every fiber of my being was screaming throughout, so I agreed to go home with him. He used physical force when I changed my mind upon seeing his penis and raped me.”

The BBC’s version of the statement reads:

“[They] threatened to out me as a terf and risk my job if I refused to sleep with [them]. I was too young to argue and had been brainwashed by queer theory so [they were] a ‘woman’ even if every fiber of my being was screaming throughout so I agreed to go home with [them]. [They] used physical force when I changed my mind upon seeing [their] penis and raped me.”

TERF is an acronym for trans-exclusionary radical feminist and is often used in a derogatory and abusive manner towards women who don’t accept the rhetoric that ‘transwomen are women’.

The decision to censor the rape victim’s quote has been met with backlash by women’s advocates and journalists who said it undermined the BBC’s responsibility for accurate and impartial reporting. “It’s quite shocking. I can’t think of any other situation where we would change the words of an alleged rape victim,” one source told The Times.

Angela Wild, co-founder of UK lesbian campaign group Get The L Out, said the BBC was wrong to amend the quotes:

“It’s really unethical and disrespectful to the victim. It’s a form of gaslighting for a woman who has already been through sexual violence.”

“Two thoughts on this. First, it is obviously unethical journalistic practice to substantively alter a source’s quotes without the person’s permission. Second, it is deranged to prioritize the feelings of an alleged rapist over accurate reporting. But then, despite claims to the contrary, this isn’t about individuals as much as ideological conformity.

“I am reminded here of Ricky Gervais’s controversial trans segment in his SuperNature Netflix special. Mocking the unreasonable objection to single-sex spaces, Gervais acts out a confrontation between a woman and a trans activist. ‘What if he rapes me?’ ‘What if she rapes you, you f***ing TERF whore?’”

It is not the first time the BBC has drawn controversy for conforming to gender ideology. Earlier this year, the broadcaster was forced to edit an article on endometriosis referring to women as people “assigned female at birth” after receiving a large number of complaints. The BBC corrected the term to “women”, but stopped short of issuing an apology. Then just this week, the BBC admitted to making a ‘misleading’ comment on one of its radio programs that JK Rowling’s views on gender identity were an ‘unpopular opinion’.

It is also not the first time a woman’s quote has been amended to appease transgender activists. In September last year, the American Civil Liberties Union (ACLU) tweeted an altered quote by Justice Ruth Bader Ginsburg about ‘abortion rights’, where it replaced references to ‘woman’ with ‘person’ or ‘people’. 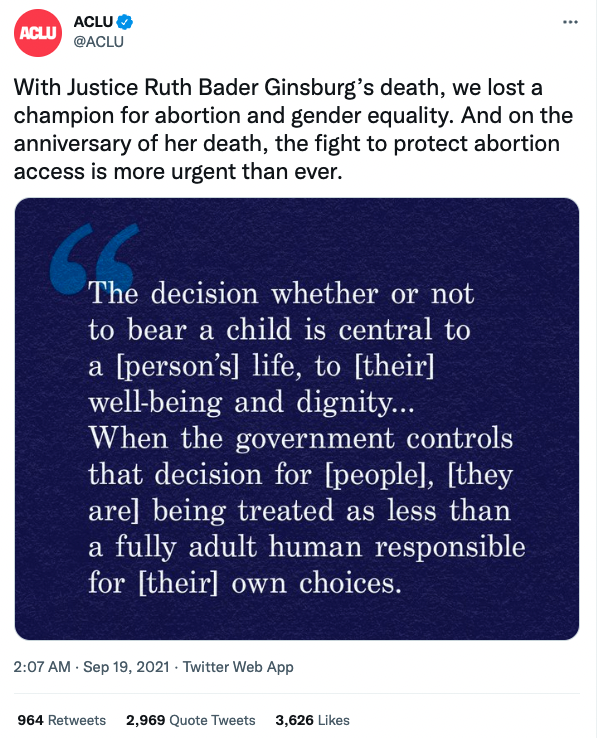 The tweet was met with backlash, after which the ACLU’s executive director said it was a mistake and shouldn’t have happened. He did however go on to qualify that it “was not a mistake without a thought,” as there are people who are pregnant who do not identify as women. So not really an apology after all.

The erasure and redefinition of women in language in order to be ‘inclusive’ of biological males who identify as women is an ongoing issue. We have written previously about how this results in the dissemination of inaccurate information, the dehumanisation of women, trans-identified males accessing women’s single-sex spaces and services, and the censorship of words women need in order to speak about their physical reality and lived experience. Similar concerns arise in this instance.

While the BBC may not have erased female related terms in order to appeal to biologically male trans people generally, they have arguably done worse by effectively erasing and undermining the experience of a vulnerable, abused, female rape victim in order to be ‘inclusive’ and ‘respectful’ to her alleged biologically male rapist. The story is reminiscent of the outrage that followed in December last year after an Australian media outlet referred to a biologically male transgender sex attacker as a woman.

How is it that the feelings of a purported rapist take precedence over accurate reporting and the testimony of the woman he raped? Why is it that respect is so readily extended to men who identify as women and so readily withheld from actual women?

This is yet another example of men’s feelings being prioritised over truth and women’s rights and welfare. It is ironic that the original article addressed concerns about lesbian women being disrespected and gaslit, when the article itself did exactly the same thing to the rape victim it misquoted.

On 1 June 2022, the BBC’s Executive Complaints Unit (ECU) ruled favourably in response to a significant number of complaints that the article was harmful and offensive to trans people and did not meet accuracy standards. Despite addressing the accuracy concerns raised by the trans community and amending the article accordingly, the accuracy concerns raised by women were not acknowledged and the rape victim’s quote remains uncorrected.

Once again, transgender interests have been elevated above those of women, and women’s voices have been ignored and their concerns dismissed.

Just a few years ago at the height of the #MeToo movement, it would have been unthinkable for a rape victim’s testimony to be altered to appease her rapist. This just goes to show how quickly women’s rights and welfare are being degraded by the transgender movement and how urgently women must push back against the harms of gender ideology if they are to have anything left to protect.

Journalist Sean Fewster has received backlash on Twitter after sharing his story about TikToker Rachel Queen Burton, who this week...