Those following the transgender movement will already be aware of the excellent research Jennifer Bilek has done to follow the money back to Big Pharma. Beginning with her 2018 piece in the Federalist, “Who Are the Rich, White Men Institutionalizing Transgender Ideology?”, Bilek’s 11th Hour Blog, has been amassing the evidence to show that the trans movement is nothing like the spontaneous, grass-roots, minority-centred social justice movement that many believe it to be. She explains it is rather a corporate affair, funded significantly by a tiny group of “rich white men” with some grandiose ideas about shaping the future of humanity and significant financial interests in the biomedical and pharmaceutical markets opened up by gender theory.

Given the backroom connection between community-facing trans activism and significant global financial interests, Bilek argues that the trans movement is correctly understood as:

“a glamorous ad campaign generated by elites, invested in tech and pharma, to normalize the changing of human biology. I believe this because I have researched the money behind the rapidly growing juggernaut of transgenderism in American culture and beyond, and it all leads back to the pharmaceutical and tech giants that now interface with LGBT NGOs which are driving the normalization of a biology-denying ideology … The LGB civil rights movement has been subsumed by elites who have added the T to normalize the overriding of our sexed reality as humans, staging a political coup of mammoth proportion.”

Bilek’s work focuses on America but it is not hard to identify the connections between Australian LGBTIQ+ advocacy organisations promoting gender ideology and the international actors she documents. The Greens, Equality Australia, and the AIDS Council of NSW (ACON) might look like independent, community-facing organisations who are concerned to alleviate the oppression of the downtrodden. The staff and supporters of these organisations may even be completely genuine in their belief that the mission begins and ends with “LGBTIQ+ rights”. The social justice rhetoric is persuasive.

However, regardless of who believes what, it does not take extraordinary cynicism to notice that “LGBTIQ+ rights” is a means of tapping into promising new income streams for anyone willing to carry water for the cause. Gay rights organisations, and feminist enterprises that were in danger of achieving their missions, and therefore losing a compelling reason for their continued existence, have been infused with new life and purpose by pivoting to “trans rights” and promoting gender ideology to the world.

What Bilek’s work has done is trace the source of these new revenue streams back to a handful of billionaires whose strategic investments have primed the pump on an industrial complex that promises to deliver wildly lucrative returns on their initial investment while masquerading as a legitimate social justice cause.

The influence of rich white men and their philanthropic foundations

“These men and others, including pharmaceutical companies and the U.S. government, are sending millions of dollars to LGBT causes … Transgenderism sits square in the middle of the medical industrial complex.”

Often, the private “philanthropic funding” of these men is directed through charitable foundations which operate as tax shelters, and allow multiple funders to direct finances to particular causes (political campaigns, for example) in ways that are hard to track. Grantmakers United for Trans Communities’ (GUTC) list of the top ten contributors to transgender causes in 2017−2018 (which together accounted for 55 percent of all trans funding), demonstrates the Big Pharma interests at work: 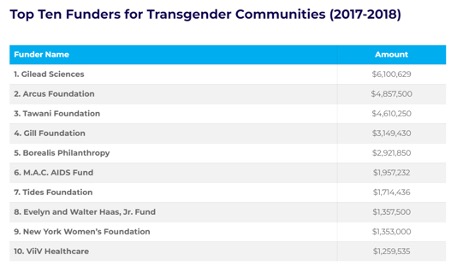 Clearly Gilead Sciences – “a research-based biopharmaceutical company focused on the discovery, development, and commercialization of innovative medicines” – stands to benefit from growing the market for “trans medicine”. Arcus Foundation (“Push Boundaries. Make Change”) is founded and directed by Jon Stryker, heir to major stocks in his family’s company, Stryker, which manufactures medical and surgical equipment. Tawani Foundation is run by Jennifer Pritzker, who, together with his family, has invested strategically in medical, legal and educational institutions (including Planned Parenthood – now among the largest global purveyors of hormones) to promote gender ideology.

When we have Professors of Child and Adolescent Gender Care, like Dr Deanna Adkins of Duke University School of Medicine, arguing unscientifically that, “From a medical perspective, the appropriate determinant of sex is gender identity” and that ,“It is counter to medical science to use chromosomes, hormones, internal reproductive organs, external genitalia, or secondary sex characteristics to override gender identity for purposes of classifying someone as male or female”, it is not unreasonable to speculate that this may be representative of ulterior, non-academic, interests.

The costs of medical transitioning mean that “trans people” represent both a social justice cause and a lucrative business opportunity. “Transgender health services” reaches into cosmetic surgery industry, promoting demand for phalloplasty, vaginoplasty, facial feminization surgery, urethral procedures, mastectomy and breast implants). Then there is the market in hormones – puberty blockers, cross-sex hormones – that must be taken daily. An individual habituated to artificial hormones is likely to become a customer for life because, even if they detransition, they may need artificial same-sex hormones to compensate for the loss of natural hormone production. Big Fertility obviously benefits as more people need to harvest and preserve sperm and eggs. Biogenetics investments promise to open a new market in womb transplants in the coming years.

Bilek points out that the first gender clinic for children opened in Boston in 2007. By 2018, that figure had risen to 30 clinics. According to the gender mapping project, there are now over 300 in the US alone and the numbers of patients they see each year is also rising exponentially. The same pattern is observable across the western world, including here in Australia.

Youth and young adults obviously represent a significant target market for the burgeoning industry in gender transition. The disposable income of youth is significant (as demonstrated, for example, by expenditure on mobile phones and related services) and so hormones, while expensive, might not be out of their financial reach. Boutique businesses like “Plume” (in America) are springing up to service this market, promising to smooth out the financial bumps in each client’s “gender affirming journey” for an all-inclusive package-deal price of just $99 per month. On the other hand, the cost of high-ticket items, like surgeries, are often out of reach. The numerous “Go fund me” appeals of transitioners crowdfunding for mastectomies demonstrates that coughing up the $10,000 required is often a financial impossibility for young people.

We can already see “trans rights groups” working to remove the financial barriers currently inhibiting this promising market by transferring the expenses of transitioning to the public purse. The argument is made that, because transitioning is necessary for trans people to function in the world, it represents a health need in exactly the same way that knee-reconstruction surgery represents a health need. Accordingly, the Greens party is lobbying for the costs of “gender affirming surgery” to be covered by Medicare. At the same time, it is censoring its members that question gender ideology and affirming that “trans rights are not negotiable”.

The Greens (Australian Greens LGBTI members) is listed as a member on the website of ILGA world, along with 35 other Australian LGBTIQ+ organisations. ILGA enjoys consultative status to the UN’s Economic and Social Council (ECOSOC) and boasts of over 1,700 member organisations in over 160 countries. It receives significant funding from multiple sources (including, Stryker’s Arcus Foundation, for example) and provides the means of co-ordinating the global objectives of transgenderism’s funders through a constellation of organisations which, although ostensibly unrelated, all work in concert to promote gender ideology and reduce the barriers to Big Pharma’s colonisation of the new markets this creates.

In 2018, for example, Anna Brown, CEO of Equality Australia (also a member of ILGA) together with Dr Michelle Telfer, Director of the Gender Service at Melbourne’s Royal Children’s Hospital, among others, successfully lobbied the Family Court to cancel the requirement for court approval before teenagers in Australia could access cross-sex hormones. Telfer is responsible for “development and expansion” of gender services for children and she has enjoyed remarkable success in this role. In 2018 she co-authored the “Australian standards of care and treatment guidelines for transgender and gender diverse children and adolescents”, which, as she later explained, were written in order to give the Court and politicians reassurance that, were the process of court oversight of transition decisions to be removed, there would be responsible clinical governance in place to safeguard the interests of children.

The “Australian standards of care” recommend the “affirmation only” approach to gender transitioning for youth in which the therapist is guided by the wishes of the child. The process involves no psychological assessment and therefore no means of screening for mental comorbidities or trauma. The gender identity claims of the child are not to be queried or challenged, meaning all the usual obstacles to medication with puberty blockers and cross-sex hormones (otherwise known as “safeguards”) are removed.

In 2021, the Victorian government announced a further $21 million for “trans health”, which will allow the services currently offered in Telfer’s clinic to reach children in remote and rural parts of the state. The same agenda is being promoted by ACON (another member of ILGA). ACON is a NSW government-funded organisation originally established to minister to the needs of gay men in the wake of the AIDS epidemic. It has now found renewed purpose in ministering to the health needs of “the trans community”. These health needs include running TransHub – a resource that promotes gender transition by promoting the psychology free “affirmation only” approach to transitioning: it instructs patients on how to avoid “gatekeeping” from doctors; it provides lists of “affirming doctors”; and training for doctors who are unsure about how to  affirm gender diverse patients, etc.

In 2021, the close collaboration between a small number of ideologically convinced activists in strategic positions of influence in Victoria bore fruit in the form of Victoria’s new law to prohibit “Change or Suppression Practices”. This requires population-wide compliance with gender ideology. The Victorian Equal Opportunities and Human Rights Commission (VEOHRC), tasked with re-educating the populace in their new obligations, has already made it clear that, according to its reading of the law (a reading which is contested), “a parent refusing to support their child’s request for medical treatment that will enable them to prevent physical changes from puberty that do not align with the child’s gender identity and denying their child access to any health care services that would affirm their child’s gender identity”, is committing an illegal act. In this way, all obstacles to the medication of gender dysphoric children have been removed.

At the same time, gender ideology is promoted through the school system (even at day care centres). Like many other states, Victoria’s Department of Education and Training policy encourages schools to socially transition children, even without parental knowledge or consent. Schools are not required to consult with medical experts before secretly transitioning children.

In 2018, Bilek posed the important question: was all the money directed at gender ideology internationally “enough to change laws, uproot language and force new speech on the public, to censor, to create an atmosphere of threat for those who do not comply with gender identity ideology?” In 2022, we can certainly say of Australia that the answer is unquestionably “Yes”. However well-intentioned or sincerely persuaded Australia’s local LGBTIQ+ rights organisations and advocates may be that the agenda begins and ends with LGBTIQ+ “health”, we need to recognise that “gender ideology” actually leads to a whole new ideological universe in which the human person is reimagined and human populations are laid open for profit harvesting by global oligarchs in ways that are unprecedented in human history. What we have is massive profiteering masquerading as a social justice cause.

Three weeks ago, the death of 22-year-old Mahsa Amini sparked nationwide protests across Iran. The Kurdish-Iranian woman was visiting Tehran...

By Stephanie Bastiaan A review into the culture of AFL Hawthorn Football Club, which surfaced a couple of weeks ago,...

Our campaign to remove a violent male sex offender from the Dame Phyllis Frost women’s prison in Victoria is heating...