The socially acceptable abuse of women and children

The socially acceptable abuse of women and children

The commodification of women and children is increasing. Some of the industries that profit from the sale of bodies such as pornography and prostitution are considered controversial, even if they are not outright condemned; the sex slave trade is vehemently decried. However, a more inconspicuous industry that objectifies and commodifies women and children with far broader social acceptance is the surrogacy industry.

This is due to the perception of surrogacy as a social good – an altruistic act that provides a longing couple or single with the baby they were unable to produce alone – this is a carefully curated image. The reality is that surrogacy is big business and its aims are monetary, not morality.

There are two types of surrogacy: altruistic and compensated. Altruistic surrogacy is when the woman elects to be a surrogate without payment; her costs may be covered but she must not receive any money or gifts as payment. Altruistic surrogacy can include either the traditional form where the mother’s own egg is used in conjunction with donated sperm, or the more common form, gestational, where an egg and sperm are implanted in the surrogate's womb. Compensated surrogacy is when a woman is paid to be a surrogate; it can also be traditional or gestational.

In Australia, the states and territories dictate the surrogacy laws. There are many similarities between the laws. All states and territories, except the Northern Territory, have criminalised commercial surrogacy. It is also illegal for residents of the ACT, New South Wales and Queensland to enter into commercial surrogacy overseas, punishable by jail time. Altruistic surrogacy is the only form legal across Australia.

The most common countries where Australians rent women’s wombs are India and the United States. The average total estimated costs are $69,212 for India and $172,347 for the US. These findings are unsurprising. Surrogacy is the purview of the wealthy and privileged, only they can afford to buy children. On average, the altruistic surrogacy process in Australia costs between $55,000 to $65,000, but can cost as much as $90,000 overall.

Australia’s efforts to prevent human rights abuses from taking place through overseas compensated surrogacy are failing. This is mainly due to the difficulty in convincing Australian women to carry and give up a baby (sometimes their own genetic child) when there is no money involved. If surrogacy was the social good its proponents claim it to be then we would see much higher rates of altruistic surrogacy in Australia. Unsurprisingly, the personal cost for women, more often than not, outweighs any perceived benefits.

Of the Australians who paid women overseas to carry a child for them, 47 per cent were de facto, 43 per cent were married and 6 per cent were single. The majority accessing paid-for surrogacy were gay men at 69 per cent. The average age was 40 years old, with the largest number of paid for surrogacy respondents earning a combined yearly income of more than $260,000.

On average, around 25 births per year are attributable to altruistic surrogacy in Australia, with a further 500 plus births being recorded for Australian residents using overseas compensated surrogacy. In the UK, the number of surrogate births has tripled from 121 in 2011 to 368 in 2018. 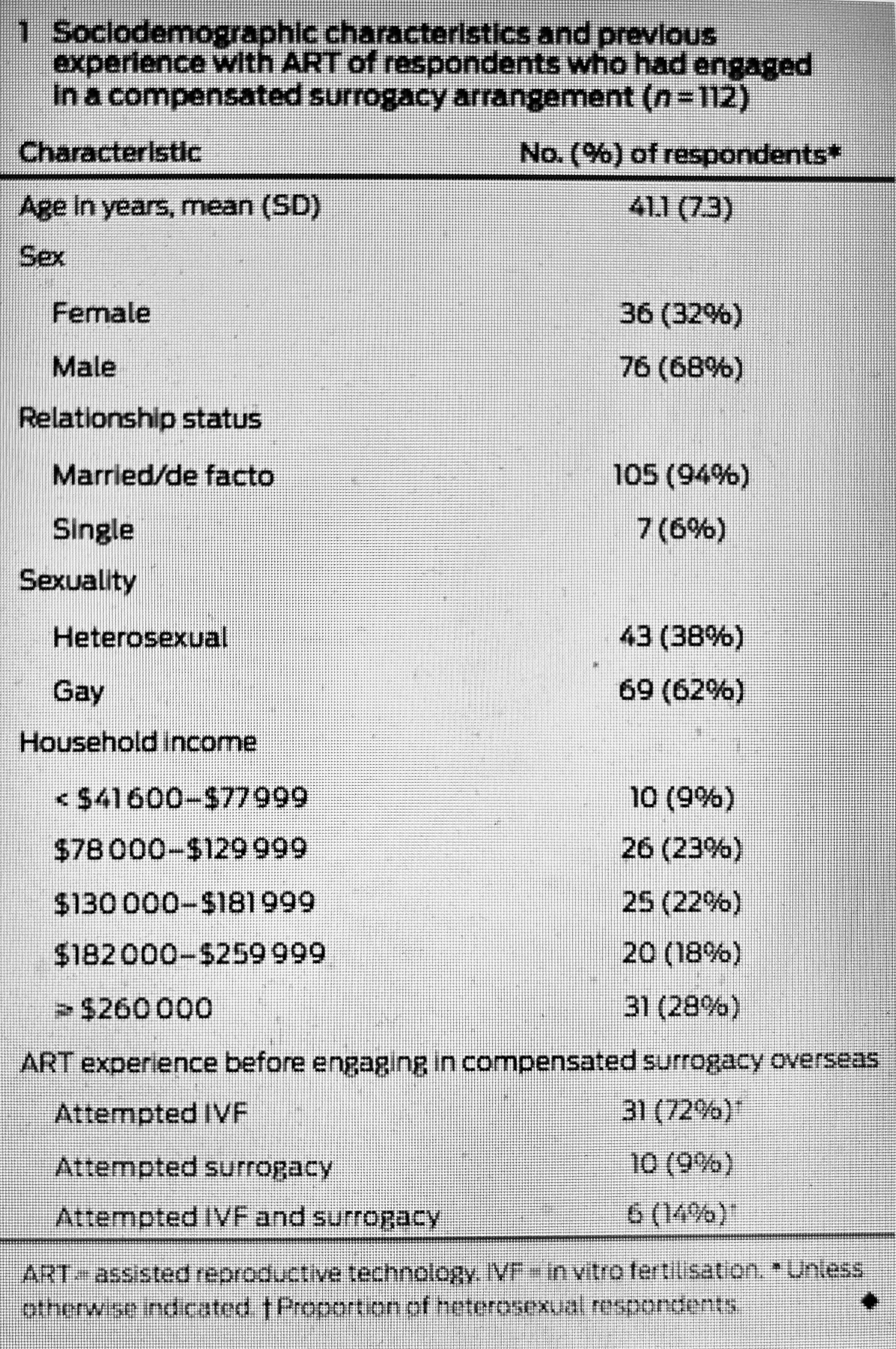 Commercial surrogacy has become illegal in some overseas countries where surrogacy was previously booming, including India, Thailand, Nepal and Cambodia. These countries closed their thriving surrogacy industries over concerns of the exploitation of women including bonded labour, and the legal rights and citizenship of children born through surrogacy.

Some countries like Germany and France have completely forbidden surrogacy because it violates the dignity of women. It’s recognised as a practice that exploits women as a means to someone else's end. Similar to Australia, the UK views surrogacy as a gift from one woman to another, and allows only altruistic surrogacy. California, Russia and Ukraine permit commercial surrogacy, seeing it as an issue of women’s free will. Many international surrogacy destinations remain unregulated, like Kenya and Nigeria. There, surrogacy is a popular form of health tourism where wealthy westerners go to rent the wombs of women in poverty.

The UN has warned that "commercial surrogacy ... usually amounts to the sale of children". They are correct. There are far-reaching ramifications for children who are bought and curated by wealthy foreign adults. Aside from the ethical issue of being bought by one's parents, children born from traditional surrogacy arrangements are purposefully taken from their biological mother and denied a relationship with her. Children from gestational surrogacy arrangements are carried and birthed by a woman unrelated to them, and in the case of same-sex male parents, these children are also conceived using a donated egg, so they are denied both their biological mother and the mother who bore them.

The fact that a child might struggle with the idea of being birthed by a woman who isn’t their mother, or suffer harm after the gestational bond is severed, isn’t taken into consideration at all. Then there are the children who are abandoned without ever even making it to the parents who “ordered” them in the first place. The reality is that surrogacy is a modern-day experiment that denies children their natural rights to their parents and perverts the biological reality of conception, pregnancy, birth and parentage.

There are also consequences for the women who carry and birth a child, only to give it away. Women who become surrogates might not fully appreciate the profound impact it will have on their physical, emotional, mental and psychological health. Carrying a baby for nine months and delivering them in labour are not experiences a woman can simply disconnect from; they are profoundly female experiences; they are the first experiences of motherhood. To pretend that there are no negative outcomes for a woman in giving up the child they have carried and given birth to is both callous and naive.

“The practice of surrogacy is inherently exploitative of women, treating them as incubators and subjecting them to risks of physical and emotional harm for the benefit of those who wish to rent their wombs.” Women involved in surrogacy are seen as a commodity (the infamous Ukrainian clinic BioTexCom are barely trying to hide it anymore). Women are only asked to be a part of surrogacy in the first place, due to the usefulness of their womb. It is a woman’s body and its capabilities that matter – much more so than the woman herself. It isn’t her nurturing, her goodness or mothering ability that are the point – it’s her body. Once the child is born, the woman’s usefulness has been exhausted; this is the case whether the surrogacy is altruistic or commercial.

Take this unnamed woman who was brave enough to share her story. She was an altruistic surrogate for friends, she shares how “It was an incredibly traumatic experience, and afterwards [she] had to receive treatment for post-traumatic stress disorder (PTSD). [She never talk[s] to anyone about [her] experience as [she] still find[s] it utterly devastating”.

We only ever hear about the positive stories in the media, pushed by the organisations that promote surrogacy. It is important that people hear about how surrogacy can go seriously wrong, and the life-long impacts of that on the women who offer their bodies to be used by others.

I naively thought I would simply have the embryos implanted in line with my own menstrual cycle. I did not realise my own natural cycle would have to be chemically halted, and the amount of harmful and synthetic hormones I would have to take to create an artificial cycle that was in line with the egg donors.

I felt like I could not back out and devastate my friends. I went ahead against my own better judgement and my internal instincts which were warning me – because I did not want to cause offence or upset my friends.

I was also persuaded to have two embryos implanted to increase the chance of successful implantation. I now realise I did not fully understand the increased risks for myself of carrying and birthing twins.

Looking back, I see that I subjugated my own health and safety to prioritise the desires of the intended parents. I also realise that my own psychological state at the time of making these decisions meant that I had a martyr complex and that I was too self-sacrificing. I completely deprioritised myself. This was due to a lack of self-esteem and assertiveness, and seeing my value lying only in how useful I was to others. I had an overdeveloped sense of ‘service’.

This female socialisation and psychology needs to be investigated, researched and considered in the context of altruistic surrogates.

This woman’s experience isn’t an anomaly and research into the wellbeing of surrogate mothers is both one-sided and seriously lacking. The complex ethical issues that surrogacy raises and the harmful consequences for vulnerable women and children need to be urgently addressed, instead of continuing to turn a blind eye in favour of commercial interests or the desires of commissioning parents.

By Rachael Wong The magnitude of what has just happened in the US is still setting in, and while many...

It is great to see the issue of males being housed in women’s prisons finally getting some airtime in Australia...

Why trafficking in women flourishes in Asia

According to a recent article in Psychology Today, sex-based inequality is a significant factor contributing to trafficking in women, which...