Perhaps they hope the gullible will simply believe and move on. But when PornHub’s business model depends on challenging and stretching every conceivable moral boundary, why should we believe they are sticklers for the truth? Such emphatic protestations of righteousness don’t pass the smell test. 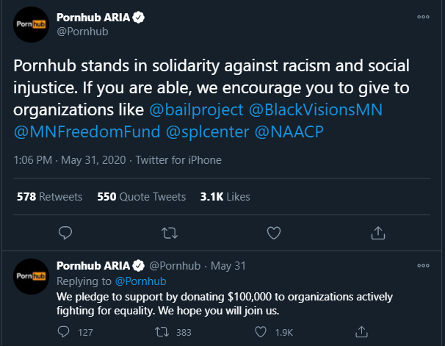 But the $100,000 so generously donated was earned from downloads featuring the rape and torture of women fighting for their next breath. Literally. As Nicholas Kristof reported:

PornHub’s underinvestment in moderators is consistent with its lacklustre record of removing child sexual exploitation material (CEM) from its platform. Worldwide, CEM is a problem that continues to grow. A 2017 report about online child exploitation in Australia described the problem as “a pandemic” - CEM increased by as much as 400% between 2013 and 2015. The National Centre for Missing and Exploited Children confirms the exponential increase in this problem with numbers of CEM videos or files tripling every two years: