In the last month, Australia’s National Research Organisation for Women’s Safety (ANROWS) released a research report, titled: “A Life Course Approach to Determining the Prevalence and Impact of Sexual Violence in Australia.” The report summarised findings from the Australian Longitudinal Study on Women’s Health.

The older two cohorts of women had been given several rounds of interviews, in two-four year intervals from 1996 to 2019. Data on the youngest cohort began in 2013, and was collected on an almost yearly basis up to 2019.

The ANROWS report showed striking differences across generations in the reporting of sexual violence in adulthood, with younger cohorts of women reporting far more.

And what about the Baby Boomer cohort? Data on experience of sexual violence at the hands of a partner was not available, but the information that was available was telling. In 1996, aged 45-50, just 1% of the Boomers reported ever having experienced sexual violence in adulthood. By 2001, the figure was 5%, by 2013 it was nearly 10%, and by 2019 it was 12%. 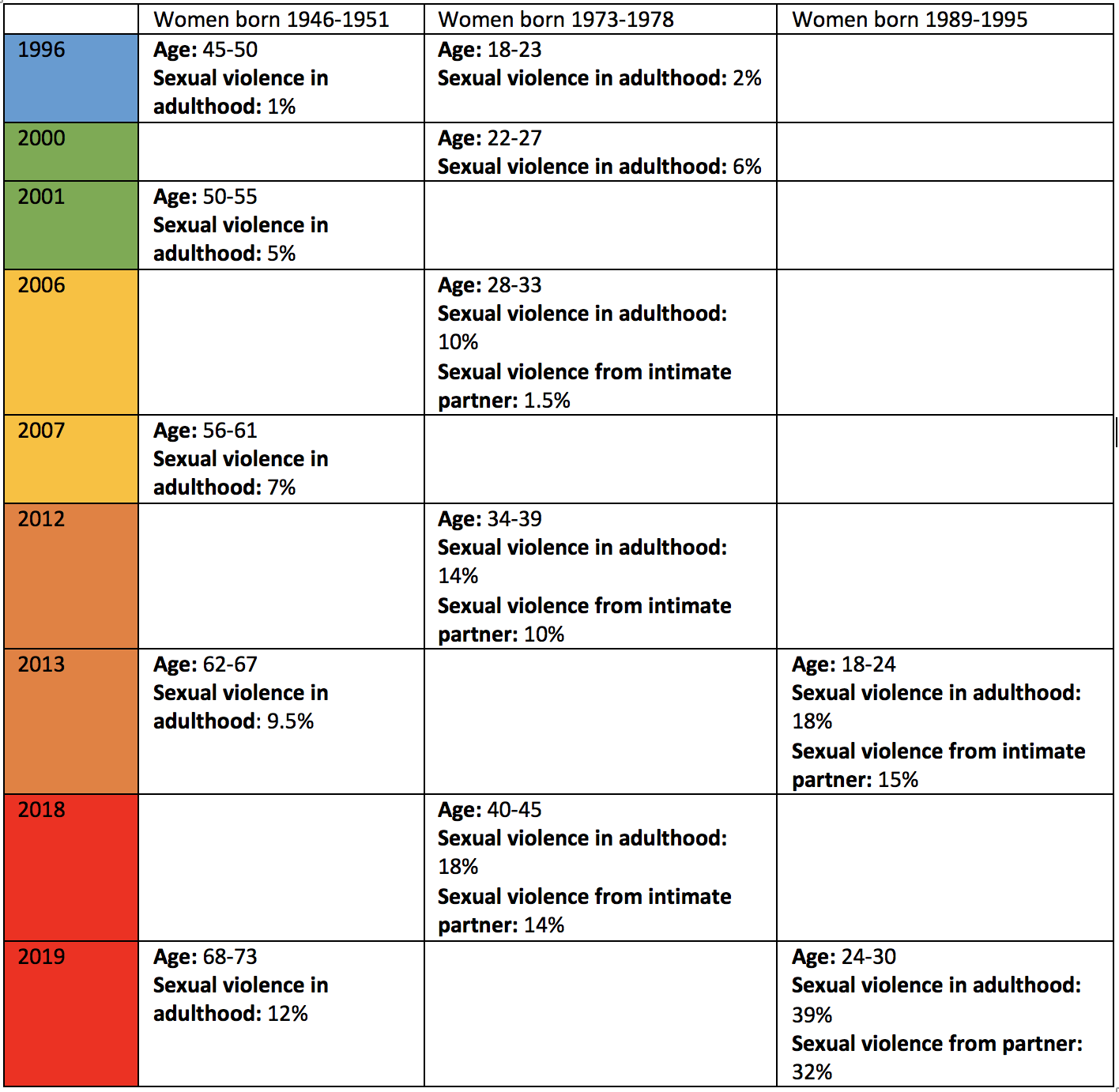 As for the possible explanation for generational differences in reporting of violence, the authors’ suggestion was that willingness to report, or differences in understandings of and attitudes toward sexual violence might have contributed.[2] But as the primary explanation for the variation across generations, this seems unlikely given that, according to the report’s own statistics, the levels of reported sexual advances or violence during childhood remained relatively constant across the generations: 14% for the Boomer cohort, 15% for the Gen-X cohort, and 12% for the Gen-Y cohort.[3] If there were any ‘hangups’ on the part of older women related to the disclosure of potentially embarrassing or painful information, one might expect this to show up in lower reports of sexual harassment or violence in childhood.

Clearly, something else is going on. While unwanted advances in girlhood from older men or boys seem to have been a roughly consistent experience for all generations of Australian women, something else is accounting for the different degree of violence perpetrated toward adult women, where imbalances of power are less obvious – as they are, very often, in intimate relationships.