Whatever industries have been adversely affected by the pandemic, the fertility industry does not appear to be one of them. Of particular note is the number of children being commissioned through IVF or surrogacy on behalf of single parents who, perhaps in response to uncertainty created by the pandemic, have decided to tackle the task of parenthood on their own. In the rush to approve the personal choices of adults, the media does not seem to consider the situation of the children being commissioned in these arrangements and being intentionally deprived of at least one parent in the process.

Last weekend, for example, the Brisbane Times carried an upbeat story about “How surrogacy allowed a single man to keep hold of his fatherhood dream”. Shaun Resnik, who found himself single at 40 “with a lot of love to give” and still not having met ‘Mr Right’ decided to “embark on fatherhood alone”. Lynn Burmeister, the director of Number 1 Fertility, commented that she believes this case may be a significant landmark.

“It will open people’s eyes to the possibility that you can start a family as a single dad,” she said.

Sarah Jefford, a Melbourne surrogacy lawyer, has noticed an increase in the number of single men seeking legal advice on surrogacy in the last two years. Jefford believes an increasing social acceptance of single parenthood is one of the factors driving the interest of single men investigating surrogacy.

Logistically speaking, it has always been far easier for women to become single parents by intention, but experts have observed a striking upward trend in young single women using donor sperm for fertility treatment as well. Last year, the number rose to 866 in Victoria alone. This represents a 48 per cent increase over a four-year period and now far outstrips the number of same-sex female couples in the state using donor sperm to concieve a child (we have already written at length about our concerns regarding IVF and sperm donation).

The fertility industry may receive this news with gladness but those who are concerned for responsible social policy should not. The future health of a society depends, to a great extent, on ensuring optimal conditions for its children and all the evidence points to these being secured where children are brought up by both their biological parents. Of course, there are many reasons why this may not always be feasible, but we should not seek to intentionally create more. The received wisdom of millennia of human experience should not be tossed aside, simply because technology now makes it possible.

When Victorian Assisted Reproductive Technology (ART) laws were revised in 2008, the process was guided by a report produced by the Victorian Law Reform Commission (VLRC), which recommended “placing the best interests of the child at the centre of decision making”. Accordingly, the “Guiding Principles” listed in the Assisted Reproductive Treatment Act 2008 (ART Act) that resulted state, in s 5(a) that: “the welfare and interests of persons born or to be born as a result of treatment procedures are paramount”.

How these interests are to be secured in practice is less certain and it appears that the law does not allow family structure to be taken into consideration as a factor in the decision making. The VLRC report is clear that, in making its recommendations to the Victorian government:

“The Commission drew on an extensive body of social science research that has found that it is the quality of parenting that most affects children’s wellbeing and outcomes rather than family structure.”

Such a conclusion is highly contestable but it has apparently now become embedded in legislation. Section 5(e) of the ART Act states that:

“persons seeking to undergo treatment procedures must not be discriminated against on the basis of their sexual orientation, marital status, race or religion.”

The ART Act is very clear that guardianship of the intended child is to be made over to the “person or persons” who commissioned the child.

The requirements of s 5(a) – that the interests of the child must be paramount – and s 5(e) – that considerations of sexual orientation and marital status are not to be factored into the decision making – can only be reconciled if we first accept that family structure has no bearing on outcomes for children. There is, by now, extensive research to contradict this premise and underscore the wisdom of traditional child-rearing arrangements. Katy Faust, writing for Them Before Us has summarised the most recent findings in her essay “Biology Matters” in which she says:

“Regardless of how often we hear, ‘it doesn’t matter who raises a child as long as they are safe and loved,’ the data reveals that being raised by both biological parents is one of the strongest predictors of whether or not a child will actually be safe and loved.”

A US National Incidence Study of Child Abuse (Number 4) in 2010, for example, shows a clear distinction in rates of child abuse. Whether sexual, emotional or physical, abuse is far lower with “married biological parents” than any other category. 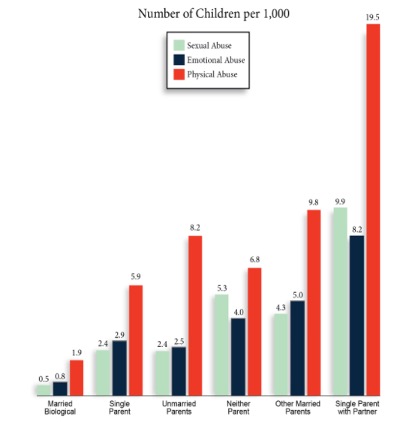 Mothers and fathers also have unique and equally important roles to play in a child’s life. Stories like Mr Resnik’s give the impression that mothers are dispensable – they are not.

In her book “Being There: Why Prioritizing Motherhood in the First Three Years Matters”, backed by research in psychology, neuroscience and epigenetics, psychoanalyst Erica Komisar writes about how “mothers are biologically necessary for babies” and not only for the obvious reasons of pregnancy and birth. In an interview with the Wall Street Journal, Ms Komisar explains:

“Every time a mother comforts a baby in distress, she’s actually regulating that baby’s emotions from the outside in. After three years, the baby internalizes that ability to regulate their emotions, but not until then. [So mothers] need to be there as much as possible, both physically and emotionally, for children in the first 1,000 days.”

The regulatory mechanism is oxytocin, which Ms Komisar says “is a buffer against stress”, and is produced by mothers when they give birth, breastfeed, or otherwise nurture their children. As a result, the baby’s brain develops oxytocin receptors, which allow for emotional self-regulation later on in life. Women produce more oxytocin than men do, which is what makes them particularly suited to fulfil this role. Ms Komisar says that people “want to feel that men and women are fungible”, but they aren’t, at least not in terms of parental roles.

The Brisbane Times concludes with the hope that the story of Mr Resnik’s success in finding a surrogate will inspire other single men, who long to be parents, to consider similar methods of getting a child:

“I’ve come to the realisation life is messy...Sometimes people think they have to have all their ducks lined up in a row to have a family. But sometimes there are no ducks, or the ducks are all over the shop, but it doesn’t mean you have to give up on your dreams.”

A child-centred approach would regard the matter very differently.

An increase in the number of children commissioned to grow up in single-parent households; more children intentionally deprived of at least one of their biological parents; more babies who suffer the trauma of separation from the surrogate women who carried them for nine months and; more children at greater risk of abuse or neglect are not things to be hoped for. And this is to say nothing of the women who are used as incubators in surrogacy arrangements or harmed by IVF. Prudent public policy guards the vulnerable and protects children as a priority.

The greatest “winners” if single-parenting-by-intention becomes normalised will be the fertility industry that is so eager to profit by prioritising the wishes of adults over the needs of these children, as well as vulnerable women.

First single man has a baby through surrogacy in Victoria

44-year-old Shaun Resnik has become the first single man to have a baby through surrogacy in Victoria, in what is...

Increasing numbers of detransitioners call into question the “affirmation only” approach

While the spotlight of media and social media is directed at all the good news stories of happily transitioned children...