Facebook has slapped Women’s Forum Australia with censorship restrictions for 30 days. Why? Because apparently saying men can’t get pregnant is hate speech.

You might remember the recent win for women and biological reality, where the federal government agreed to replace the derogatory term ‘birthing parent’ with the correct term ‘mother’ on a government health form. The correction was made thanks to the backlash led by women’s social media app founder Sall Grover, who has pointed out that the term ‘birthing parent’ is “part of the attempt to dismantle the meaning of womanhood and completely detach it from reality”.

In its reporting on the story, news.com.au made the obfuscatory claim that “each year in Australia, several men give birth to children. In 2014-2015, as many as 55 men gave birth, according to Medicare records.” They maintained that this is “possible because not everyone’s gender identity matches the reproductive organs they were born with” and "using gender neutral language such as 'birthing parent' can help include people who would otherwise be excluded."

In response, Grover tweeted: ‘Exactly Zero men have ever given birth in any year, in any country.’

Exactly zero men have ever given birth in any year, in any country. pic.twitter.com/oNfBDd22eK

We had already shared several posts on Facebook and Twitter highlighting Grover’s story, in line with our promotion of women’s sex-based rights and efforts to combat the harms to women and children resulting from gender ideology. 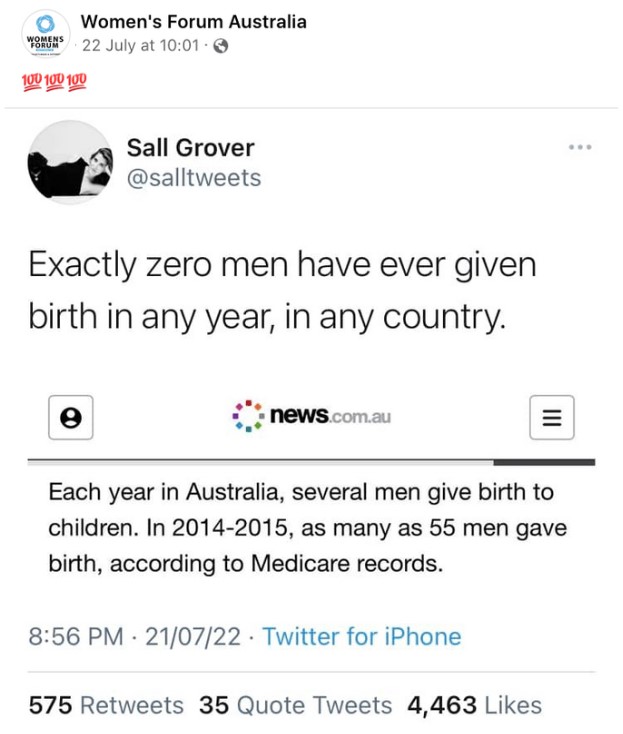 A few days later, the post was removed by Facebook and we received an alert saying, “your post goes against our Community Standards on dangerous individuals and organisations”, with a further notification stating, “your page is at risk of being unpublished and has reduced distribution and other restrictions due to continued Community Standards violations.” 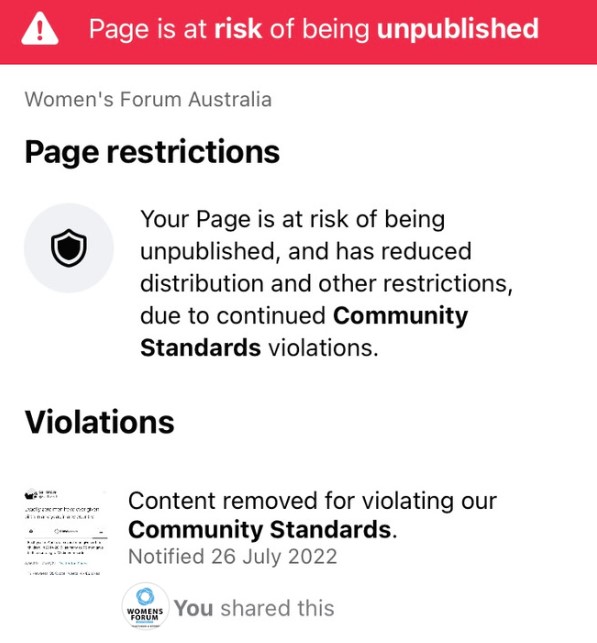 As we had never before had a ‘Community Standards violation’, we thought that perhaps a mistake had been made and we contacted Facebook Business Support, explaining that our post had been incorrectly taken down and our page unfairly restricted. In reality however, it would seem Facebook has been monitoring our page for a while. We were informed that the decision to remove our post and restrict our page was not eligible for review and that the decision to take down our post was final. As a result, we are unable to advertise, all our posts have restricted visibility for 30 days, and we remain at risk of being removed from the platform entirely. 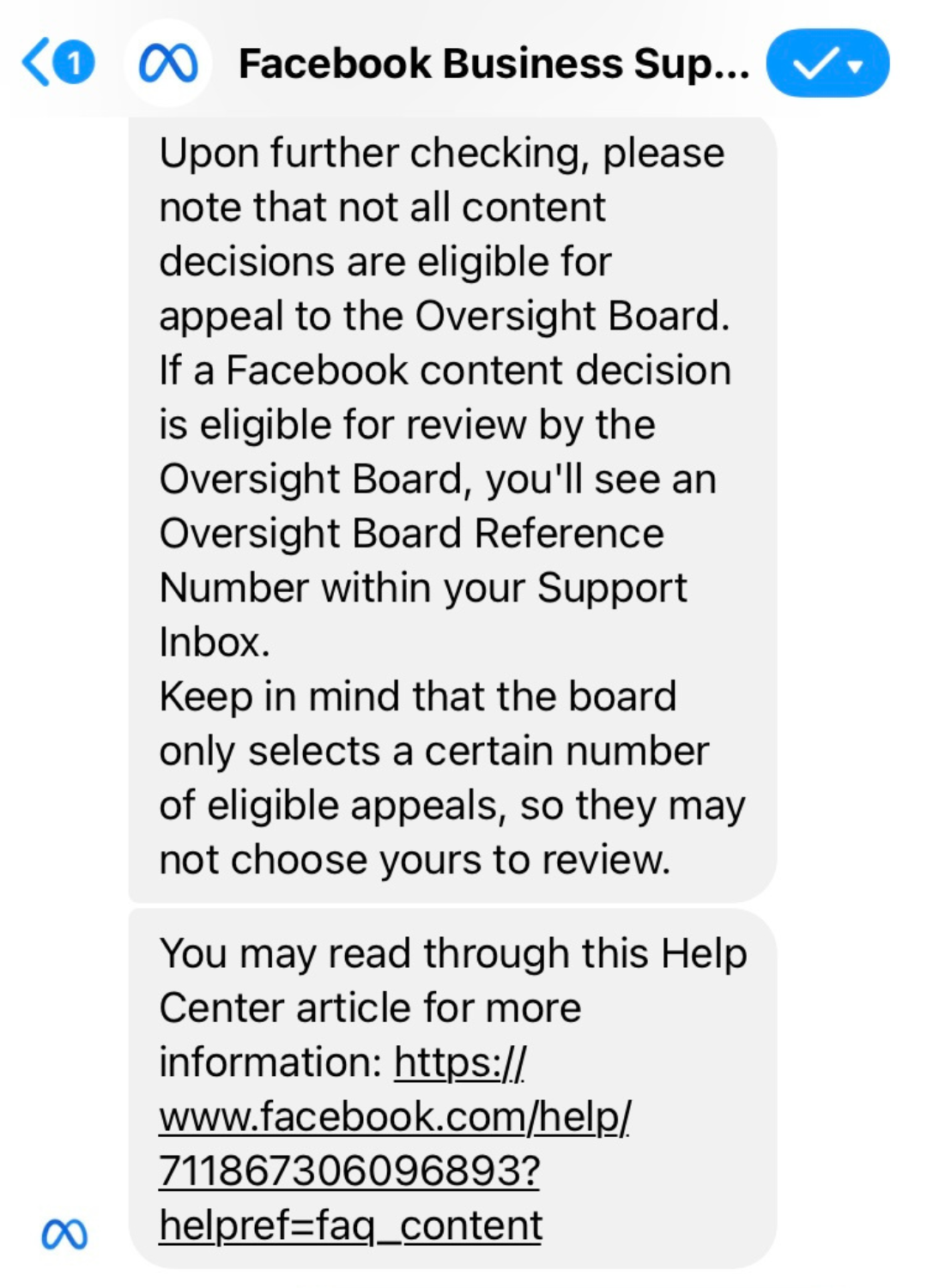 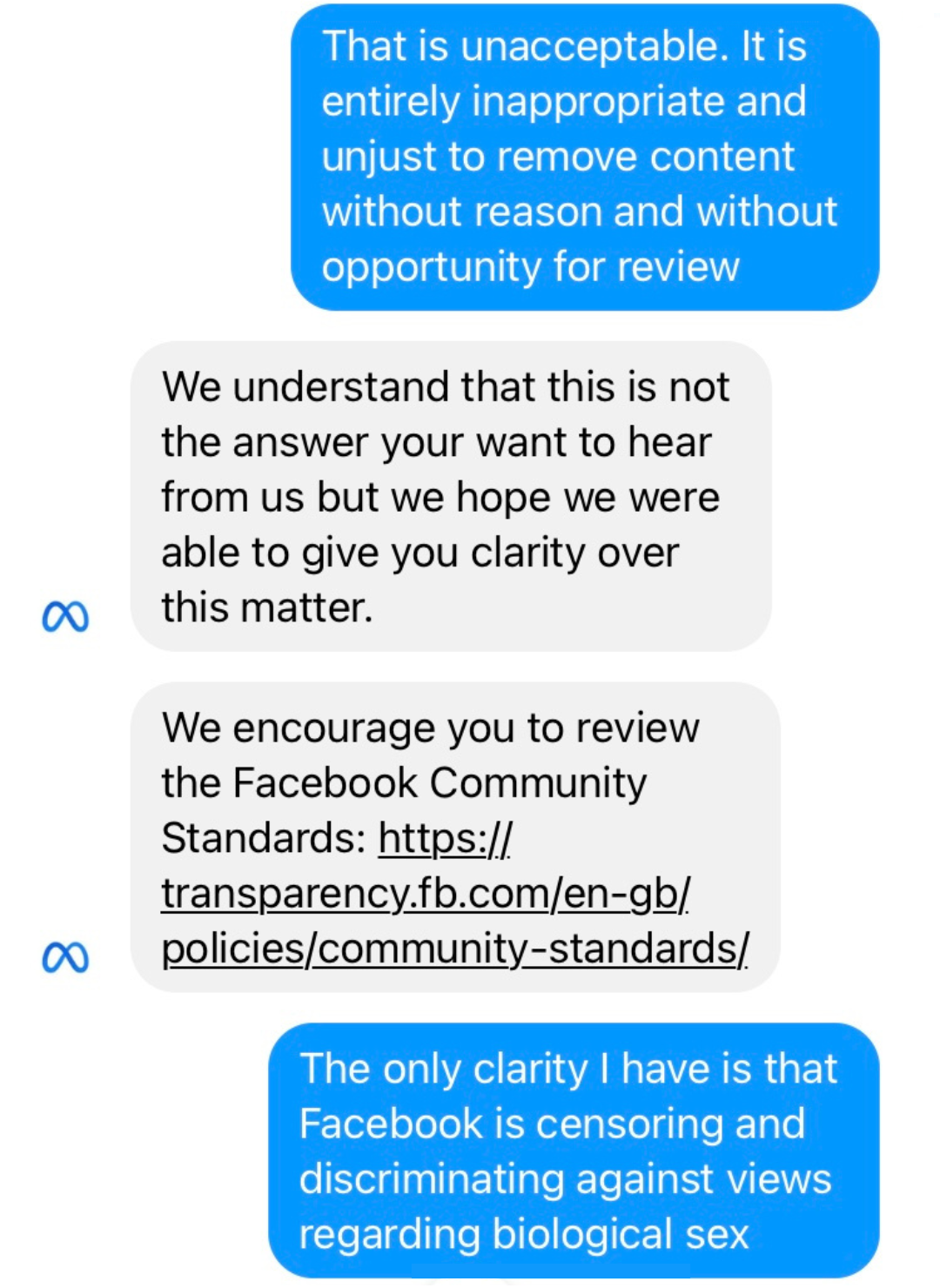 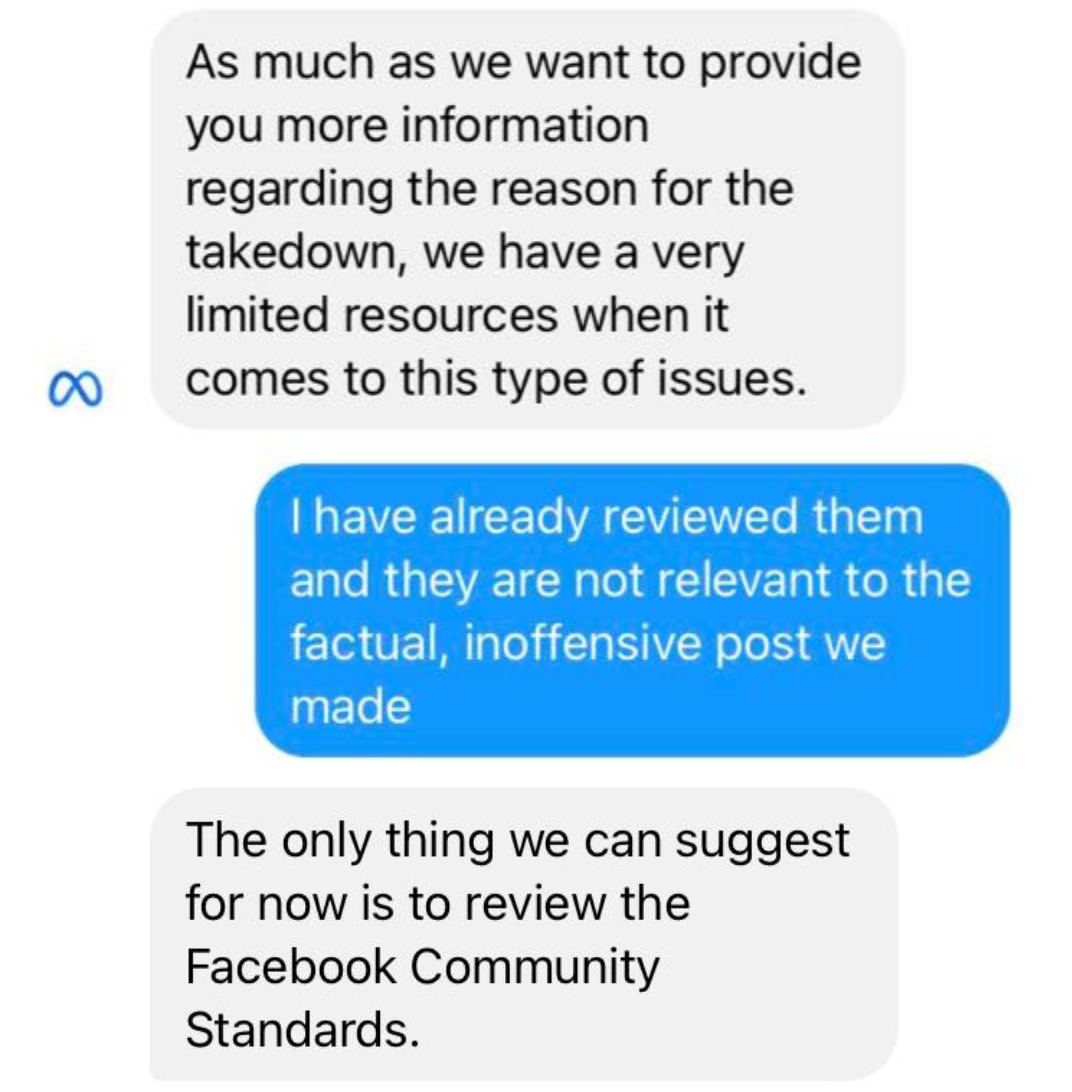 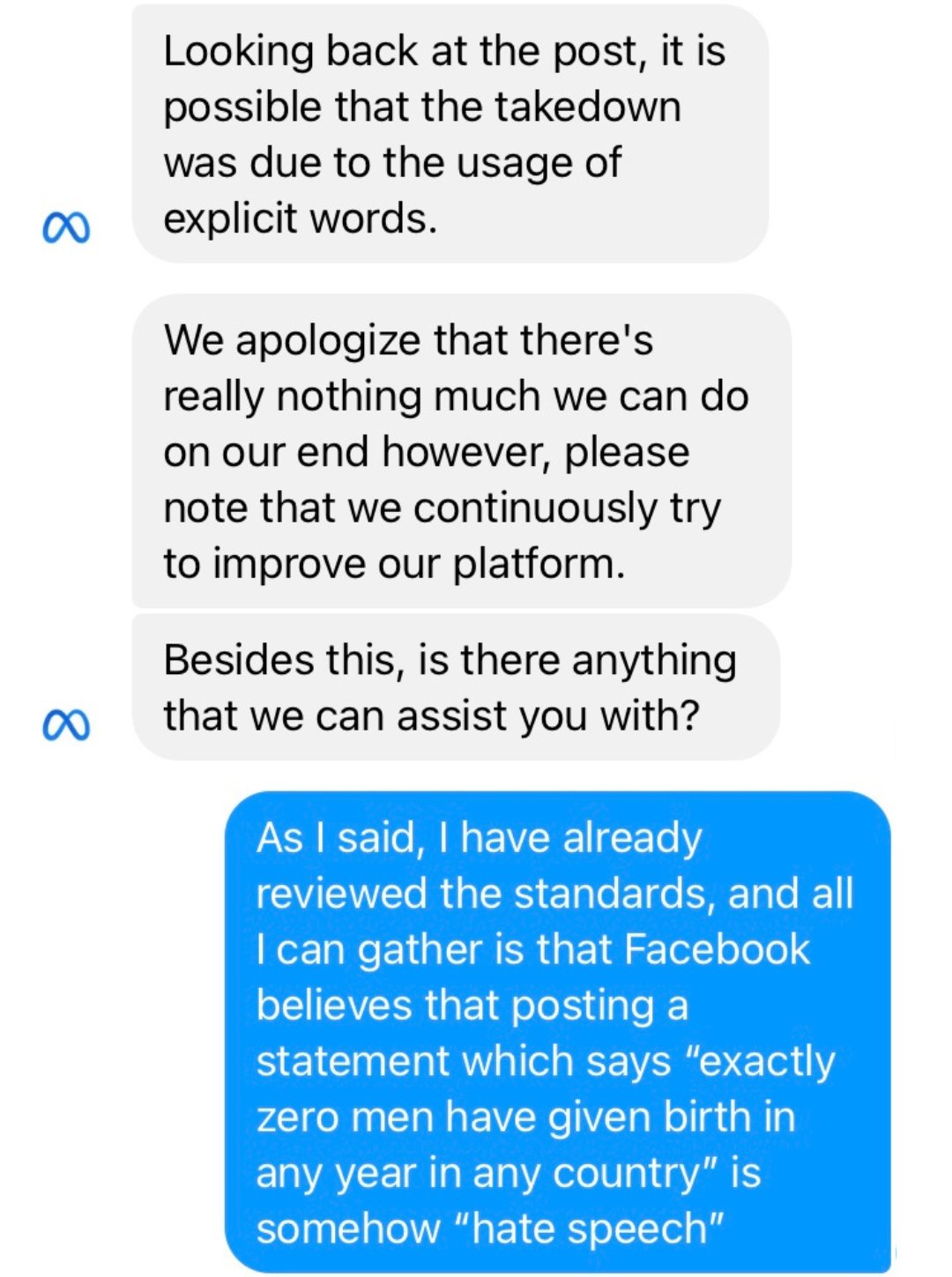 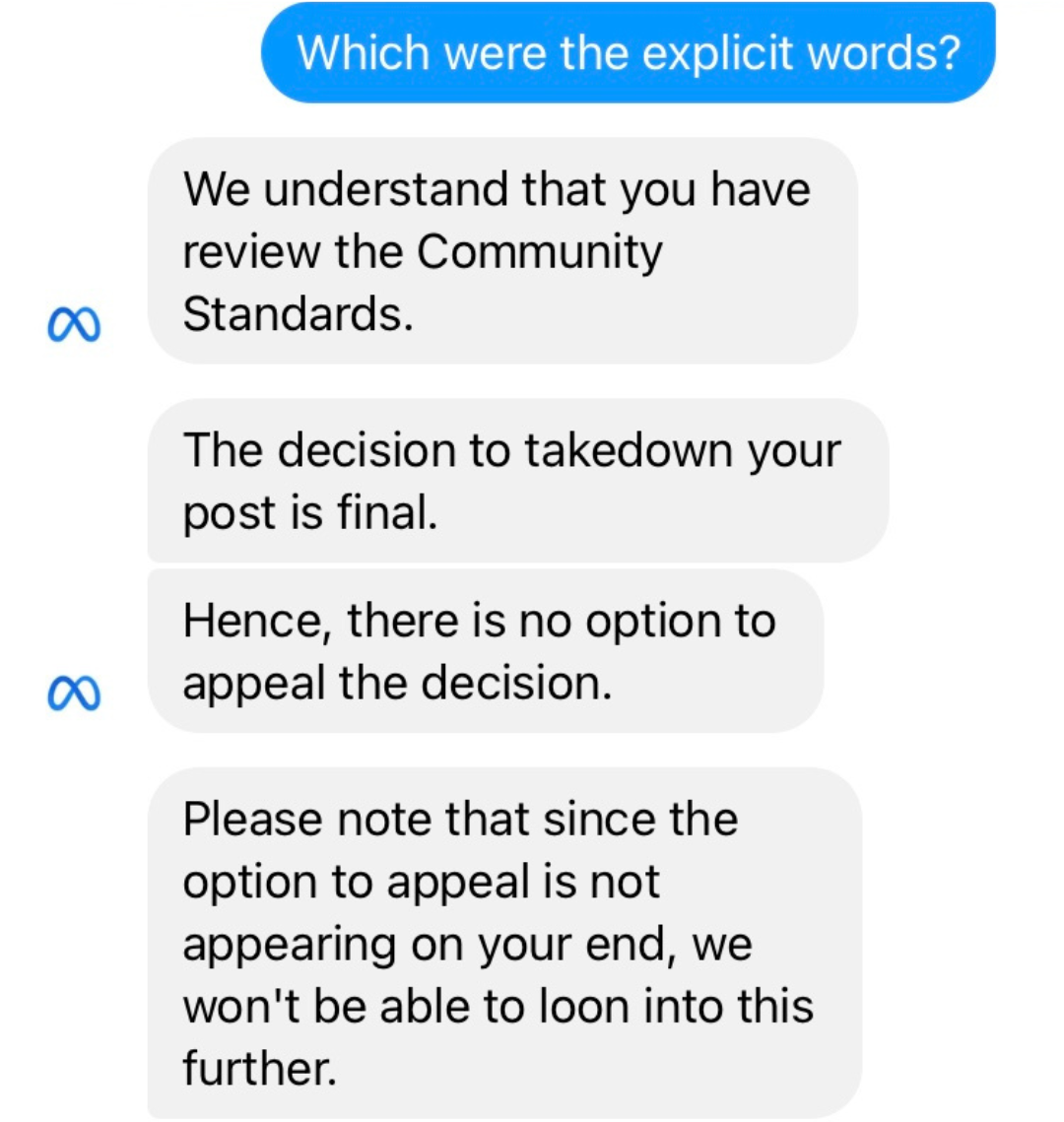 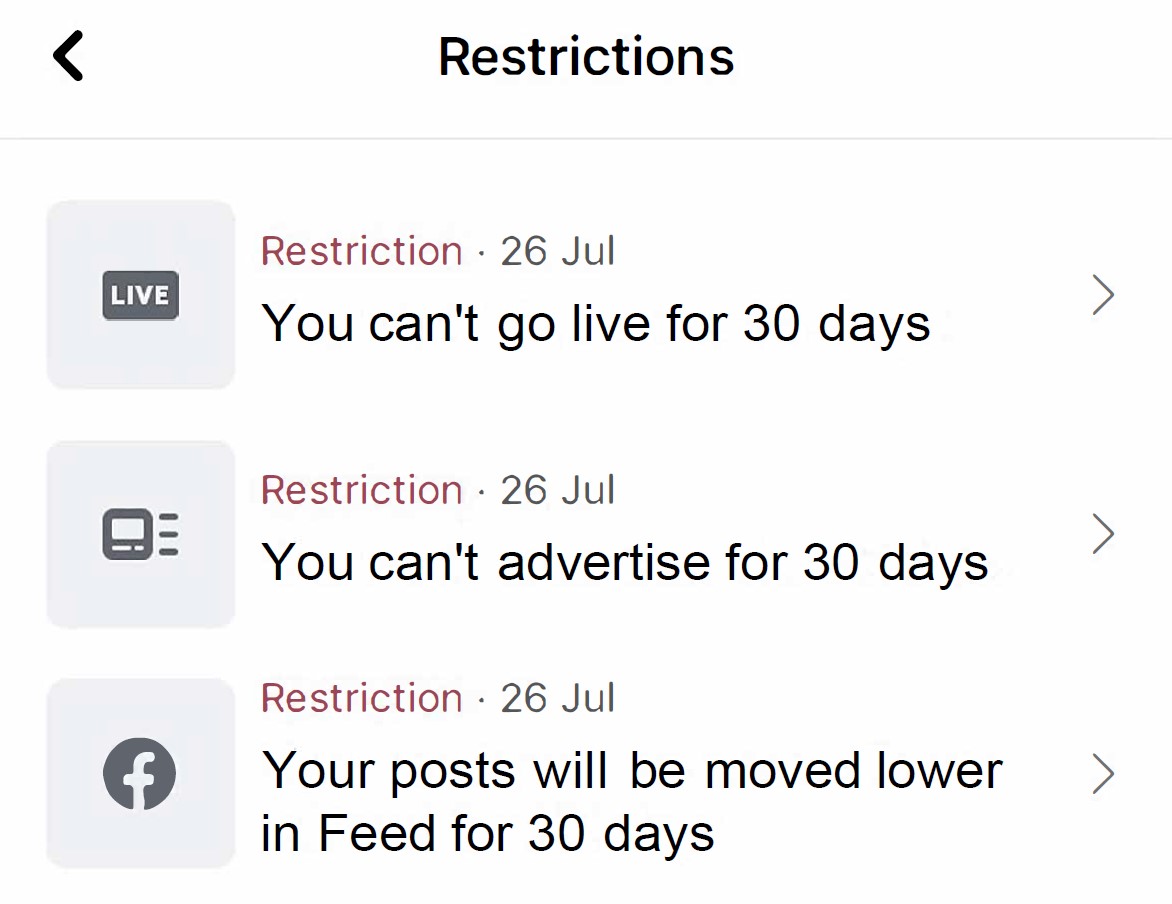 As we told Facebook, it is unacceptable and entirely inappropriate to remove content without reason and without opportunity for review, and to censor and discriminate against views affirming the reality of biological sex.

We are not alone in our concerns. A ‘United Nations Special Rapporteur has said that Facebook’s ‘Community Standards on dangerous individuals and organisations’, “may function in practice to undermine certain fundamental rights, including but not limited to freedom of expression, association, participation in public affairs and non-discrimination.” It has further noted that the term ‘dangerous’ is “vague and imprecise…making the concerns about improper, discriminatory or regressive speech restrictions more acute.”

It is worth noting that Facebook’s policy on ‘dangerous individuals and organisations’ aims to prevent organisations or individuals that promote or are engaged in violence from having a presence on Facebook. According to Facebook, these range from “terrorist, hate and criminal organisations” to “entities that engage in repeated hateful conduct or rhetoric”, for which Facebook will “remove praise, substantive support and representation” shared on its platform. It’s policy further states:

“While our designations of organisations and individuals focus on behaviour, we also recognise that there are certain ideologies and beliefs that are inherently tied to violence and attempts to organise people around calls for violence or exclusion of others based on their protected characteristics. In these cases, we designate the ideology itself and remove content that supports this ideology from our platform…and remove individuals and organisations that ascribe to…hateful ideologies.”

Given the lack of explanation that accompanied the decision to censor our page, we are left with the following questions:

Does Facebook consider Sall Grover to be a ‘dangerous individual’?

Does it consider Women’s Forum Australia to be a ‘dangerous organisation’?

Does it consider the factual statement that men don't give birth to be ‘hate speech’?

For Facebook to imply an affirmative answer to any of these questions with its very particular censorship restrictions on our account is simply outrageous.

What is similarly outrageous, is that since Facebook’s censorship of our page began, our visibility and post engagement has decreased dramatically, significantly hampering the reach of our advocacy for women and girls on a wide range of critical issues.

If there was ever a ‘hateful ideology’, it is the ideology that attempts to erase women and their sex-based rights.

In Australia and throughout the world, women continue to be silenced for speaking out about the reality of biological sex and women’s sex based rights. But all the censorship, vilification and abuse will not contain us. Men cannot get pregnant. Men cannot be women. Men should not be in women’s spaces, services and sports. The truth cannot be hidden and an ideology that is so antithetical to common sense, as well as the welfare of women and children, cannot survive. Women, at least, will not stand for it.

Rachael Wong is the CEO of Women's Forum Australia

*If you have not already registered to receive our updates, please do so now, so that you never miss out on critical information about issues affecting women and girls, even when we are being censored on social media.

**If you would like to help us expand our reach through other mediums, and counter the effect of Facebook’s censorship restrictions, please consider supporting our work here.

UPDATE -  Since the Daily Telegraph reported on our unjust censorship restrictions, Facebook have since claimed it was an error and reversed our ban. As I told the Daily Telegraph: "The fact that no option to review was provided in the original violation notification and that Facebook Business Support further confirmed that the decision was 'final', makes it hard to believe that this was simply a 'mistake'. Since speaking out, I have had numerous people contact me with similar stories - this kind of censorship is ongoing. Clearly it takes a bit of public shaming to get justice."

A couple of weeks ago we wrote a piece about how the tide of gender ideology is turning in the...

In a win for women and biological reality, the federal government has agreed to replace a government health form that...