On 30 November 2022, Nationals Senator Matt Canavan and Liberal Senator Alex Antic, introduced a private members bill into the Australian Parliament that would protect the rights of children born alive after an abortion. The bill was sponsored by United Australia Party Senator Ralph Babet.

Impetus for the bill

While abortion is generally an issue for state governments, Canavan explains that Australia has obligations under the UN Convention on the Rights of the Child, to which it is a signatory.

Article 6 says “every child has the inherent right to life” and article 24 says that governments must “ensure the provision of necessary medical assistance and health care to all children”.

It is this right and obligation articulated in the Convention that the senators’ bill seeks to hold the Australian government to, when it comes to children born alive after an abortion.

The Children Born Alive Protection Bill (‘Born Alive Bill’) would require health professionals to provide medical care to babies born alive during an abortion procedure, and such care may be palliative, if the baby is not viable.

“A child that survives an attempted termination of pregnancy should be entitled to the same level of medical care and treatment as any newborn child,” said Senator Alex Antic.

Canavan says the bill is necessary, because such protections for babies born alive do not currently exist. Indeed, official Queensland Health guidelines tell health professionals that if the baby is born alive, “do not provide life sustaining treatment”, but rather “document date and time end of life occurs”.

He says there is also likely to be an increase in such babies because of recently liberalised abortion laws throughout the country. All Australian states, now permit abortion throughout all nine months of pregnancy with the approval of two doctors after a certain gestation.

While data is lacking, government figures from Queensland and Victoria show that hundreds of babies have been born alive after an abortion in the ten-year period between 2010-2020 (396 in Victoria and 328 in Queensland).

“How is this policy, how are these deaths, in accordance with our international obligation as a nation to every child having the right to life, every child having access to health care and reducing the deaths of babies?” asked Canavan.

Critics of the bill

Critics of the bill have made several tenuous claims about the proposed law in a piece by ‘The Oz’, The Australian’s “news environment for younger Australians”, which is “powered almost entirely by Gen Z journalists”.

Monash University research fellow in global and women’s health Dr Shelly Makleff said the bill was “clearly another move in a playbook to create more barriers in abortion care”.

Dr Makleff called the bill “medically unnecessary” and largely “irrelevant” as “most abortions at later gestation are due to genetic conditions that limit viability”.

Sydney University academic gynaecologist and founder of Clinicians for Choice Kirsten Black said “Less than 1 per cent of abortions [are] done after 20 weeks anyway … and many would be preventable if there was better access.”

An Oz journalist in an accompanying video on The Australian’s Instagram maintains:

“Doctors would be forced to provide care to foetuses born alive during an abortion under a new push from conservative members of the coalition.”

“A lot of medical experts say this doesn’t happen and that this bill is just a distraction and another way to block access to abortion.”

Associate Professor in Law at the University of Adelaide Dr Joanna Howe, has responded to the bill’s critics in a video on her social media (Instagram, Facebook and TikTok). 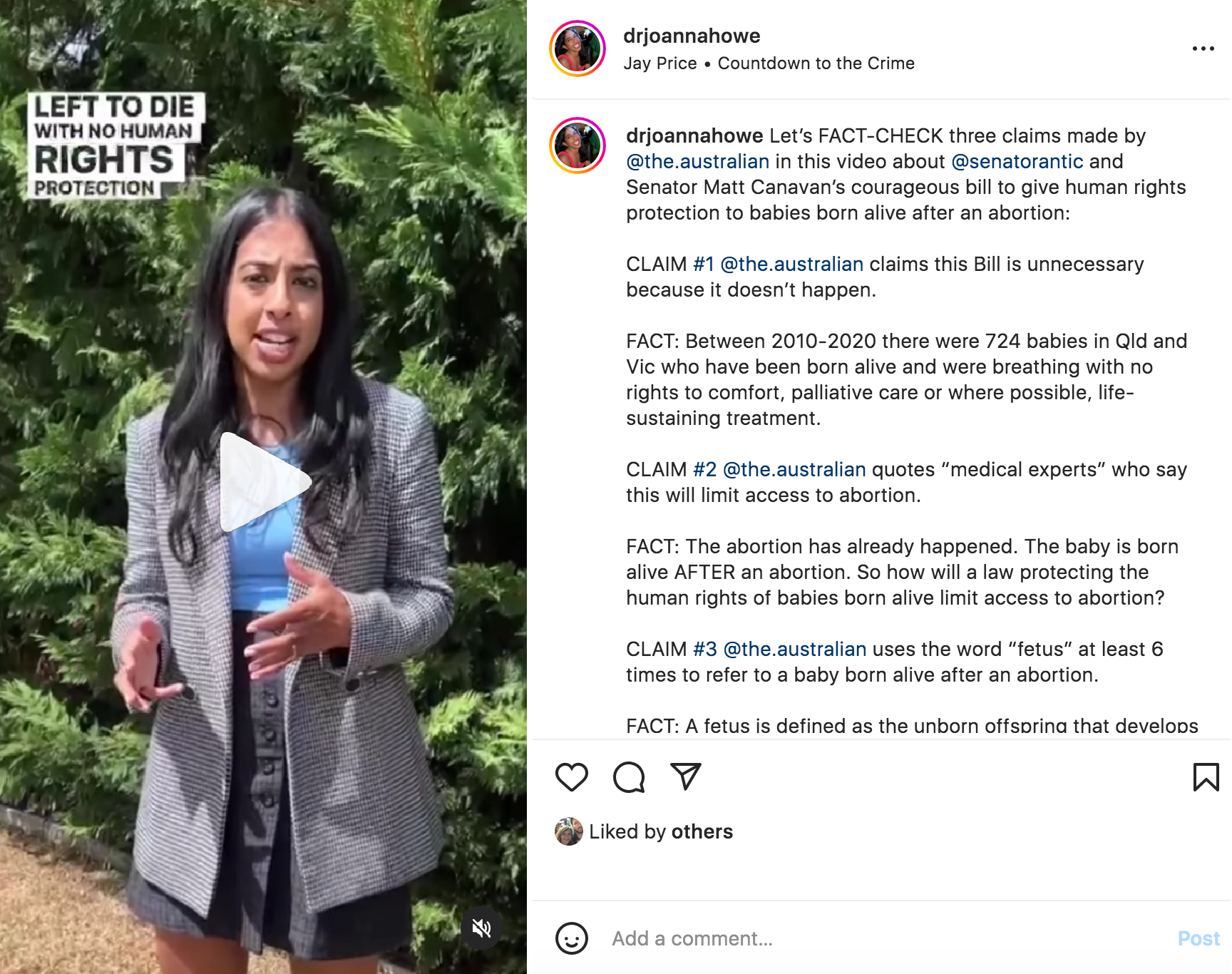 Claim 1: This Bill is unnecessary because it doesn’t happen.

Dr Howe cites statistics which make it clear that babies are being born alive in Australia and left to die.

“Between 2010-2020 there were 724 babies in Queensland and Victoria who have been born alive and were breathing with no rights to comfort, palliative care or where possible, life-sustaining treatment,” she said.

Senator Canavan has said that even if the claim was correct, there would be nothing to worry about. “If no viable child is ever born alive as a result of an abortion, then this bill has no effect,” he said.

“But if one child, just one, was born alive in such circumstances and that child was viable, then this bill would not only have an effect, but it would be more important than probably most laws on the books because it would save a life that otherwise would have been discarded like it was medical waste.”

The growing number of stories of abortion survivors lend further credence to this bill being both necessary and critical.

Dr Howe queries how this is possible. “The abortion has already happened,” she says. “The baby is born alive AFTER an abortion. So how will a law protecting the human rights of babies born alive limit access to abortion?”

Claim 3: A baby born alive after an abortion is a ‘foetus’.

Dr Howe points out that in the Instagram video, the Oz journalist “uses the word ‘fetus’ at least 6 times to refer to a baby born alive after an abortion.”

She notes, however, that a “fetus is defined as the unborn offspring that develops from an embryo and is growing inside a woman’s uterus. Once a baby is born, irrespective of what they are wanted, by virtue of their birth, they are no longer a fetus but a newborn baby.”

Claim 4: The bill is irrelevant as most late term abortions are due to genetic conditions

In an earlier video, Dr Howe responded to the claim that the bill is “irrelevant” in 99% of cases because most late term abortions are for genetic conditions where viability is an issue. Referring to the 724 babies who were born alive and left to die with no rights to medical care in Victoria and Queensland since 2010, she said “I think those 724 human beings would beg to differ that a law like this is irrelevant in 99% of cases”.

She also notes that “in Victoria since 2010, over 44% of late term abortions – that’s over 1600 babies – were for a psychosocial reason, nothing to do with a genetic condition.”

In her fact sheet on late term abortion, Dr Howe explains that “A psychosocial reason is a reason that is not in relation to the physical health of the mother or baby. ‘Psychosocial’ is a broad category with limited ‘conceptual clarity and specificity’. It relates to any impact on an individual’s ‘quality of life’.”

Dr Howe was recently targeted in a piece by The Advertiser for her social media channels on which she educates about the harms of abortion to women and children. However, despite attempts to silence her, her students and the University of Adelaide have both spoken out in support of her right to freedom of speech and academic freedom.

It is encouraging to see such support for freedom of expression and robust public debate in a culture intent on cancelling those who don’t conform to the accepted positions on any given issue. We commend Dr Howe on her willingness to bravely discuss and educate on such an important and difficult issue, particularly in the face of vilification and attempts to have her fired.

During debates regarding the Reproductive Health Care Reform Bill 2019 (passed into law as the Abortion Law Reform Act 2019) in New South Wales, we were shocked when Members of the Legislative Assembly voted down an amendment including a provision that would have afforded a child born alive after an abortion “the same neonatal care as would be given to any other child born at the same stage of pregnancy and in the same medical condition.” In our submission to the Legislative Council, we recommended that the bill be amended to provide protection to babies born alive after an abortion. Sadly, our recommendation was not taken up.

Whatever people think about the issue of abortion, we should all be able to agree that denying appropriate medical care or treatment to a baby born alive after an abortion is inhumane and an affront to the human rights of us all. There is no reason not to provide such a child with the same level of care as would be given to a newborn child at the same age and in the same state of health.

We hope that this important bill gets the support it deserves and we thank Senator Canavan, Senator Antic and Senator Ralph Babet for introducing it to the Senate.

By Stephanie Bastiaan In October 2022, the Federal Government and state and territory governments released the National Plan to End...

Why is Queensland’s Minister for Women intent on selling out women and girls?

By Rachael Wong Under Attorney-General and Minister for Justice, Women, and the Prevention of Domestic and Family Violence, Shannon Fentiman’s...

This week saw the global launch of the International Consortium on Female Sport “as the preeminent international lobby group to...

Want to tackle sexualisation on TikTok? Address the issue of pornography

By Rachael Wong The incredibly disturbing and explicit content children are being shown and encouraged to create on TikTok revealed...